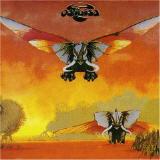 First album from Ghanian rock collective, fusing the 'criss cross rhythms that explode with happiness' (the translation of the band's name) of their native highlife music with acid guitar, prog sensibilities and jazz improvisation.

'Osibisa' was formed in London, England in 1969. The nucleus of the band was from Ghana, others, like the unbelievable guitarist Wendell Richardson, came from Antigua; the bass player who was simply known as Spartacus (I'm Spartacus!) was from Grenada; the keyboard player from Trinidad; and the saxophonist was from Nigeria. However, what they all had in common was great musical rhythm, enthusiasm, and ability. Their music was borrowed from Jazz, Rhythm & Blues, African based drum music, Rock, Pop, and Latin Groove, to create quite an original sound. In Ghanaian 'Osibisa' means 'criss-cross rhythms that explode with happiness'. Now, how one word can say all that I do not know, but that is exactly how the music sounds, and they are the very words that introduce the first song on this, Osibisa's first, album aptly titled "Dawn". Like a breath of fresh air, Osibisa's music first came to prominence with the release of their first single "Music for Gong Gong'', included here on their first album, which was released at the tail end of 1970. It is a piece of music that will get even the most conservative of souls out boogieing on the dance floor. So it was great expectations when their first album was released in the early days of 1971 and the boys did not disappoint, arriving as it did when Prog-Rock was in its heyday. Each of these percussive driven songs blew away all the pretensions of those serious minded twiddlers in the likes of Yes, King Crimson, etc. Osibisa's unbridled enthusiasm was so infectious, you could not help but be dragged along by the sheer exuberance of it all. Although Osibisa's main strength was in their live concerts, they could also drum up a storm (quite literally) in the studio. Nobody at the time could have realized how influential their music was going to be in years ahead. Osibisa today is still known as the Godfather of 'World Music', and the effect of their big hit single "Sunshine Day" (1975) was to change the disco scene for ever. But this, their first album, was to set the template of the Osibisa sound for eternity. The band is still going today, albeit with only two of the seven original members left, which actually is not bad by today's standards considering that the band is now in their 35th year. Many of the songs on this collection are still in the band's live repertoire today. Like all good albums, the songs on this set play like a live concert. Opener "Dawn", which begins with the immortal translation of Osibisa, builds on a rhythm of percussion until giving way to let the individual soloist bring the song to a rousing conclusion - some seven and a half minutes later. You then get five other songs of criss-cross rhythms before being brought to a riotous climax by "Think About The People". When a band starts off its career with such a strong album, it is often difficult to keep up the standards set by its debut (especially with an ever changing line-up - Wendell Richardson, the band?s simply stunning lead guitarist, was at one stage lured away by British rockers "Free"). So it is perhaps true to say that Osibisa's studio output has been a little patchy since then, although their live concerts have never been short of marvelous, always led by Teddy Osei out front on drums, sax, fluttering flute, and vocals. This, their first album, is nothing short of a diamond. (Kim Fletcher)