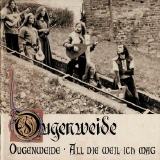 
So after a long wait, we got the 4 albums of OUGENWEIDE of the 70's. This have their 2 first ones from '73 & '74, and the band blends the best of krautrock ala EMTIDI "Saat" with a more folky flavour, sometimes with a medieval touch to it. Best folk band out of Germany, ever !! - Record Heaven

Ougenweide was one the most significant German folk-rock bands of the seventies. Their music was quite different from the 'progressive folk' music created by the early Broselmaschine and Holderlin. Ougenweide's speciality was shorter tracks in off almost medieval folk tradition with German lyrics. The result was a German answer to British groups like Fairport Convention, Gryphon and Steeleye Span. Like these groups, Ougenweide (from Hamburg) succeeded in achieving a distinct style of their own. Their records confirm that they were obviously great instrumentalists. Through the years the nucleus of the Wulff brothers, von Henko and Isenbart remained intact. Minne Graw was their female vocalist from the third album onwards. A large part of their repertoire consisted of traditional German folk songs. The early albums are their most acoustic ones, the later works also utilised synthesisers. - "Cosmic Dreams At Play"

Ougenweide are to Germany what Malicorne are to France, Horslips to Ireland, Labanda to Spain, Gryphon to England and The Charlie Daniels Band to America - i.e. groups that play electrified indigenous folkloric music. (Is this perhaps the first time in history that Labanda and The Charlie Daniels Band have been mentioned in the same sentence?). Definitely a different German breed than the cosmic folk Pilz groups like Broselmaschine and Emtidi or the more freaky/experimental Parzival. Ougenweide use a typical rock band base (electric guitar, electric bass, drums) and augment that with an array of melodic instruments including flute, mandolin, accordion, piano, etc… There are alternating female (soprano register) and male vocals, all in wonderful German, the former proving to be the more pleasing and enchanting... - Tom Hayes, Gnosis

This group started from Hamburg and has roots in the mid-60’s in the City Preachers and the Fabs, but Ougenweide was really born in 69 with the break-up of the latter. Their folk rock music is a based on their discovery of Pentangle’s Basket Of Light and Fairport’s Liege & Lief crossed with ISB’s tendency to use eastern instruments, but not the acid vocals. They chose to not only sing in German, but also to use older Middle High German, which gave them an authentic feel, especially in their Northern regions, where Platte Deutsch ruled (Low German dialects), writing their own texts, with the arrival of literature student Olaf Casalich. Even their name comes from a 12th century poet Von Reuenthal, meaning ”feast for the eyes”. The group is built around the Wulff brothers (bassist and multi-instrumentalist), the afore-mentioned Casalich (vocals and percussions), the guitarist Von Henko and other percussionist Isenbart, but also boasts two female singers, Blunck and Kollmorgen. Ougenweide, unlike other German Folk Prog groups like Emtidi, W&W, Holderlin and Broselmachine did not try to rock up their sound, even if they used some electric instruments.
The debut album (which has recently been released in a different recording session under the name Wol Mich Der Stunde compilation of 2004 with Steinbeck in the fold) was produced by icon Achim Reichel and boasts short songs that seem to come out of the traditional folk rock. A few of the tracks seem to be the equivalent of English folk (unless these were common to both cultures. Nieman Kan Mit Gerten, Der Fuchs (The Fox) and the instrumental Sarod certainly are very similar and were obviously strongly influenced by it (we are in 73 and FC is now an old band). While the bulk of the material was written by the group, but also a large part of their repertoire was made from trad medieval folk, one thing is certain: they sounded authentic and their virtuoso playing was very convincing (especially electric bassist Stefan Wulff, being a big part of their sound) and they quickly became a reference in their country. The album flows very smoothly until the second last track, which is a rather abnormal spoken intro for the demented closing track. Clearly the group resembling best Ougenweide was France’s Malicorne.
Although historically speaking Ougenweide was not really groundbreaking, they were one of the more authentic when it came to medieval folk (along with Gryphon, Malicorne and their countrymen Parzival) and certainly never tried to become commercial. While this debut is more trad UK folk, it is not the group’s most representative, but certainly an essential album, for anyone into this genre of music. - Hugues Chantraine

After their highly successful debut album (artistically anyway), Ougenweide suffered their first two departures with both female singers leaving. The outstanding Minne Graw replaced both Kollmorgen and Blunck, and the line-up would remain stable for the next few years.
The least we can say is that the noticeable visual line-up change was almost inaudible sonically-speaking as this second album (while not a carbon copy) is rather similar even if less Fairport Span, and slightly more medieval and more even. As the tracks unfold their medieval ambiances, the album also appears less electric (but Ougenweide’s albums never really were electric, anyway), more reflective and even more authentic than the debut. Again, Malicorne comes to mind, sometimes Harmonium (on the instrumental Fur Irene) or The Amazing Blondel where they get baroque on Rattenfanger. The good thing is that the album avoids a bit the “Celtic Jigs” cliches (only Ich Spring comes close), but the album avoids getting repetitive. Bassist-keyboardist Stefan Wulff (excellent electric piano on Fur Irene) is again the key member of the group, with his irresistible bass lines. The highlights are the two lengthiest tracks, the great Der Rivale (the rival) and Der Blinde Und Der Lame (the blind and the mute), where the group gives itself room to expand musically with a great flute solo.
Yes, this album has less of “rock feeling” and is much more pre-classical oriented, and it is usually considered their best, even if their first four albums are all outstanding. This album came in a gatefold with the Middle High German lyrics and its modern German translations both printed on the inside fold. Purer medieval, slightly more progressive, but very marginally better than its predecessor, this album exudes authenticity and commands solemn respect in regards to the performance. A must. - Hugues Chantraine

Ougenweide is a German band that performed roughly from 1971 to the end of the 1970s. Heavily influenced by German medieval verse, their music falls into the general Steeleye Span/Malicorne category, but with German lyrics. They range from faithful renditions of old songs to Fairport Convention-ish folk-rock, but may appeal to many progressive fans who enjoy folk and medieval/Renaissance music. Minne Graw's vocals are a definite strong point. There's a guy who sings as well who isn't bad, but it's very much like Maddy Prior and Tim Hart in Steeleye Span -- vocally, Maddy stole the show. The instrumentation is very good and varied (the instrument list is as full as on a Gentle Giant record), but some of the more "modern" sounding tracks have a tendency to sound dated. Overall, this is a fantastic folk band with many progressive touches. They sound unlike anyone I can think of, but with definite medieval ambience. Recommended album: All Die Weil Ich Mag. - Piotr Dubiel, New Gibraltar Encyclopedia Of Progressive Rock

Probably the most commercially successful of German folk-rock bands, Ougenweide originated in Hamburg circa 1970 (going through various incarnations and styles) and becoming Ougenweide proper in 1971. Their name came from the pet name of medieval lyricist Walther von der Vogelweide, whose texts were sometimes used in their music.
From the start through to the 1985 split, Ougenweide had a stable nucleus of four: Olaf Casalich, Jurgen Isenbart, Frank Wulff and Stefan Wulff. Also there in the early days were one Michael Steinbeck and female singer Brigitte Blunck. Ougenweide were fortunate to have a big helping hand from Achim Reichel, who produced them, and also signed them up to his Zebra label. Not that Ougenweide didn't deserve success, their blend of German folk musics, the medieval and the modern, was always innovative and cutting edge. Despite an obvious nod to Pentangle (ignore comparisons to Fairport Convention, the similarity is non-existent), the concoction that Ougenweide came up with was really most original.
After their debut Minne Graw joined as vocalist, her richly intoned German lyric added even more spice to their sound. Ougenweide lasted for several years, issuing numerous albums and built a large repertoire of original and traditional pieces, which are best experienced on their live double UNGEZWUNGEN, with its extended versions and improvisations. Every Ougenweide album we've encountered (all up to FRYHEIT) is generically representative of this creative band, in that they are always pushing on with new ideas, and invention in arrangement, both in song and instrumental.
Ougenweide are also key figures in German progressive music, with members featuring elsewhere. Most interesting to us are Olaf Casalich: Tomorrow's Gift, Frankie Dymon Jr., Achim Reichel, Dennis, etc., and the Hamburger Jazzband "Tuten und Blasen" and work with the Fundus Theater Hamburg; and Frank Wulff: A.R. & Machines, Es, he also worked with Pentangle in 1991, and has many theatre and drama scores to his credit.
In 1996 a new version of Ougenweide got together recording SOL presenting a much more trendy new-pop meets ancient folk and world music, kind of Enigma meets Clannad with an air of Alan Stivell, thus nothing like their former incarnation. - "The Crack In The Cosmic Egg"
OUGENWEIDE is a Teutonic musical collective formed at the beginning of the 70’s. Their music consists of “pastoral” folk rock compositions with Middle Ages influences. The band features Minne Graw (vocals, Harmonium...), Olaf Casalich (vocals, acoustic percussions), Stefen Wulff (bass guitar, accordion and keyboard), Wolgang von Henko (Mandoline, guitars and vocals), Jurgen Isenbarth (Marimbaphone, Vibraphone, vocals) and Frank Wulff (bombard, bouzouki, mandoline, sitar…). They recorded their first album in 1973. Since 1974 until the end of the 70’s they published several albums for Polydor label. They released their last album in 1981 before to split up in 1985. The band reformed in 1996 for a reunion album called “Sol”. Both released in 1976, “Orhrenschmausen” and “Eulenspiegel” represent their most notorious efforts. Two classics in the mood of authentic “Pagan” folk rock music with a great variety of acoustic instruments from medieval (with mandolin, flute, Krummhorn…) to “World” (sitar, bongos, marimba…). The result is unique and highly inspired, introducing the listener in an “enchanting” poetic, mythical world. Beautiful lyrics in German accompany tremendous prog folk instrumentations.
With a better capacity of innovation in popular music and with an exquisite sense of medieval music, OUGENWEIDE is the Teutonic version of prog folk bands as GRYPHON, MALICORNE… Their traditional folk music mixed with rock can also be compared to the Germans of PARZIVAL.
OUGENWEIDE’s discography is considered as a valuable doc
ment about profane, secular music - Philippe Blache, ProgArchives.com