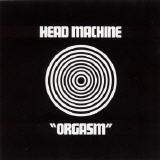 Before playing with Cliff Bennet's band Toe Fat, Ken Hensley and Lee Kerslake (later together again in Uriah Heep) found time to record an album for a specific project called Head Machine, although it was supposed to be released as The Gods' third album. The title of the album was "Orgasm" (cover image displayed below). The producer of the album was David Paramor, who also produced The Gods' albums.

The music is good, but not outstanding, and the style is something between The Gods and Toe Fat. Ken describes this project as a "mercenary" one, which means that they were involved only for the money, professionally speaking. He states that it wasn't really his band, and there are some doubts about the songwriting credits, since on the album it's written that Paramor composed all the songs, but there's deffinitely a "Ken Hensley touch" on them. It is one of the heaviest records that Hensley has ever been involved.

As a curiosity, one song from this album, "You Tried To Take It All", was later recorded with a different name on Toe Fat's first album, and credited to Cliff Bennet !!