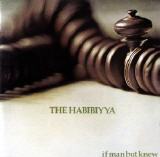 Habibiyya's sole album stands as one of the earliest and most beautiful pieces of world music ever recorded in Britain. The musicians involved (including three members of UK underground legends Mighty Baby) had been profoundly affected, both musically and spiritually, by visiting Morocco in 1971, and became adherents of the Sufi faith. Upon their return to London they made If Man But Knew, featuring exotic instruments such as koto, shakuhachi and mandola alongside guitar, organ and drums, conjuring a hypnotic, otherworldly ambience in the process. It makes its long-awaited CD debut here, accompanied by detailed liner notes, previously-unseen photographs, five rare bonus tracks and an introduction by the group's leader, Ian Whiteman.

The Habibiyya "If Man but Knew" Inspired by a trip to Morocco and a religious conversion to Sufi Islam, the Habiyya (a group that included members of Mighty Baby and the Action) created these beautiful spiritual devotionals, utilizing an array of unusual instruments and gorgeous collective singing - OTHER MUSIC

Folksy, atmospheric work with plenty of Mid-Eastern touches -- the only album ever issued by The Habibiyya, and one of the oddest sets ever from early 70s Island Records! The album's got a very spare, dream-like sound -- one that was inspired by the group's visit to Morocco before the record, and carried off here in a blend of percussion, piano, organ, and flutes - plus more exotic instrumentation like koto, shakuhachi, and mandola. The sound is often quite spacious -- stretching out on its own, almost organic accord -- and when vocals are included, they're often very low in the mix, echoing the sufi roots that inspired the group.
The Habibiyya’s sole album stands as one of the earliest and most beautiful pieces of world music ever recorded in Britain. The musicians involved (including three members of UK underground legends Mighty Baby) had been profoundly affected, both musically and spiritually, by visiting Morocco in 1971, and became adherents of the sufi faith. Upon their return to London they made If Man But Knew, featuring exotic instruments such as koto, shakuhachi and mandola alongside guitar, organ and drums, conjuring a hypnotic, other-worldly ambience in the process. It makes its long-awaited CD debut here, accompanied by detailed liner notes, previously-unseen photographs, five rare bonus tracks and an introduction by the group’s leader, Ian Whiteman. - Sunbeam

Some would say If Man But Knew was ahead of its time. It was put together after one journey to Morocco by the group and was a mixture of influences of arabic sufi singing briefly heard there and a hangover from the western rock and jazz influences of the English group Mighty Baby from whence Mike Evans, Roger Powell and Ian Whiteman came. Conrad and Zahara Archuletta brought with them Kotos, Shakuhachis and the spirit of the West Coast.
In retrospect the album was quite naive as it does no justice to Moroccan Andalusi music but is nonetheless a unique cultural bridge for anyone that wants to cross it. It was mostly extemporised after sometimes hours of meditations and sufic invocations. The album found its way into record collections both sides of the Atlantic at the time and is now available from Sunbeam Records on CD and Vinyl with 5 bonus tracks of previously unreleased material recorded at the the time. - Ian Whiteman

This is a reissue of the debut (and only) album from the Habibiya, which was originally released by Island in 1972. The group was formed by three members of the underground outfit Mighty Baby, who made an extensive journey to Morocco in 1970 which profoundly influenced them, both spiritually and musically. After returning to London, they joined forces with two additional, like-minded, multi-instrumentalists from Northern California to complete their group dedicated to creating flowing, organic, Middle-Eastern influenced music.
The set starts a bit slowly, with the first two pieces being fairly minimal and only using spare instrumentation. Beginning with the third and, perhaps, the disc’s best track “The Eye-Witness”, they apply their full sonic arsenal, combining the common instruments of modern, Western music (acoustic guitar, flute, piano, organ, viola, and so on) with more exotic instrumentation (such as bina organ, mandola, nay flute, shakuhachi, zither, and all manner of percussion) and mesmerizing vocal stylings to craft beautiful and hypnotic psychedelic ragas of the highest caliber. This CD also contains five tracks of bonus material which was intended for a second, never released LP. They are similar in nature, although they are, obviously, less fully developed and also tend to lean slightly towards the more modern, Western spectrum of sound. Still, “Another Ode” is another very authentic sounding psych raga and “Bird in God's Garden”, while clearly exemplifying more modern, Western forms, is simply too damn cool, with its droning keyboard washes and primal percussion (which reminded this listener of underground legends the Silver Apples!), to overlook. Although “raga rock” reissues are quite in vogue of late, “If Man But Knew” by the Habibiyya is clearly one of the most authentic sounding and best of the class! - ProgNews

David Biasotti's notes capture well the strange flavour of the time when If Man But Knew was recorded and released, circa 1971-72, and how we, the musicians, were essentially dabbling in something no-one really understood. Nonetheless we were fascinated as to where it would take us. After Mighty Baby hit the buffers mid-1971, Roger Powell and myself were offered a contract by Chris Blackwell of Island Records to make an album of whatever we wanted. This coincided with our first visits to Morocco and exposure to the music and singing of the sufi muslims of Fez and Meknes. This singing was spiritual in that it was about the Divine, love of the Divine and the Prophet of the Divine and much else - except it wasn't tinged with the ideas of religiosity that we had grown up with.
This music had migrated to Morocco from Andalusian Spain many centuries before and was ancient, beautiful and sparkled unlike anything we had ever heard, it had originally been formulated in Cordoba, Spain, a thousand years ago by a musical genius named Ziryab. Roughly half of it has stayed intact to this day, which is why it sounded in a way western, not eastern, and familiar to anyone acquainted with Flamenco music (which is of course its distant, if degenerated, cousin). To musicians who had become pretty jaded by the end of the 1960s it was a welcome shot in the arm, even though it was complex and sung in a foreign tongue.
What you hear on the album is really what we could understand of it after only one visit to Morocco, in early 1972. In fact it does no justice to real Moroccan Andalusi singing at all, but does give a flavour of how we experienced it. It represents a bridge we were crossing at that time, warts and all. In some ways it is more accessible to the general public than real classical Moroccan Andalusi singing, which for some would be too arcane. As we were all from western cultures we naturally brought our own instruments into the recordings, which were not the ouds and rebabs of Morocco, but zithers, pianos, shakuhachis, banjos, oboes and kotos, making it a world music fusion many years before anyone in the music business invented the category.
As David's notes explain, the recordings were extemporisations, after long periods of invocation and meditation for which I don't think there was a precedent in music recording history. The theory was that the meditation would get the egos out of the way, so the music could become truly spontaneous. Not easy, and it didn't always work - but the album has persisted these 35 years, and has even become a valued hip-hop cult artifact. Many will welcome this re-release, carefully put together by Sunbeam, which now includes some interesting new material which wasn't included on the original album. - Ian Whiteman, October 2007