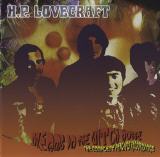 H.P. Lovecraft - Dreams In The Witch House - The C


...This is pure psychedelia offering wild vocals and lyrics with solid musicanship. This music is not for the weak at heart but for those deeply into the pschy scene this is a must. - James Unger

Obscure 1960s group HP Lovecraft are revered among psych aficionados, and this collection, which represents the band's complete recordings, and comes complete with a booklet full of pictures and notes on the band, tells the group's full tale.
Remastered 23-track collection of the legendary Chicago psychedelic band's entire recorded output on one CD. Includes previously uncompiled alternate single versions of 'The White Ship' & 'Keeper Of The Keys'. - CD Universe

...One of the best albums of the period it features the mega-scary "White Ship" based on one of Lovecraft's short stories.This is mystical, soaring psych with stunning vocal harmonies, rich production, lush orchestration, weird sound effects, brain frying guitar, trippy keyboards the works... - Freak Emporium

H.P. LOVECRAFT... the legendary 1960's Chicago underground band fondly remembered for some of the earliest FM hits. As much of a European cult as Captain Beefheart or Love, yet they remain almost a mystery band... few pictures, and few facts... until now! Rev-Ola presents their complete recordings, lovingly remastered, and beautifully packaged...the full unknown story of H.P. LOVECRAFT - with notes including NEW interviews with the band members by Nick Warburton, band biographer, historian and official webmaster, as well as many previously unseen pictures, including legendary and rare psychedelic posters.
This material has never been on CD in Europe before, and that's not all! We also include two NEVER COMPILED NOT EVEN ON VINYL bonuses: the innovative radio edit of 'The White Ship' (the version which made it a huge FM hit!) and the staggering phased-to-the-max single mix of 'Keeper Of The Keys'! The haunting sound of H.P. LOVECRAFT as you've never heard or seen it... what a start to the year, eh!? - Rev-Ola

This is a superb compilation of their only two historical albums (I make a distinction with the albums recorded as Lovecraft - which I never heard) and it might just be the only disc you will find easily. An absolutely essential listening for progheads wishing to find out Prog’s genesis and how shamefully some bands are so forgotten/ignored where some others are still in full light. As you will read in my separate reviews for the albums, HP L was one of the most groundbreaking groups and had so much talent, that it is astounding how so few people know of them. Almost as gifted as Jefferson Airplane (but maybe lacking a Grace Slick), they had an uncanny skill to make songs and lyrics to match that could easily have been sung by Raconteur-Troubadours.
Bonus tracks including a non-album single and two alternate takes are very worthy additions. A muyst-have for every self-respecting proghead. - Hugues Chantraine

Often considered as folk rock this Chicago-origined group is most surely one of the prime examples of intelligent and adventurous psychedelic rock (as opposed to the more conventional Garage rock groups discussed in the Nuggets box-sets compilations) and shows that late 60’s in new world were also a fertile ground for progressive psych rock. Comparable groups of the era would be JEFFERSON AIRPLANE, SPIRIT and LOVE.
Folkie guitarist-singer George Edwards had recorded a few folk tracks, before playing with jazzman Will Mercier, where Edwards met KB man Dave Michaels, before heading back to his next solo single which will become the first HP LOVECRAFT recording - they took the name from their collective love of the writer’s oeuvre to which they asked his estate for permission to use the name. Guitarist Cavalleri, bassist McGeorge and drummer Tegsa completed the line-up. Their first album is a mostly-covers (albeit completely rearranged) album that can be compared to a much more subtle VANILLA FUDGE album.
They relocated to the San Francisco region following a few high-profile shows at the Fillmore West opening for PROCOL HARUM, DONOVAN, PINK FLOYD, TRAFFIC as well as all the local San Fran Flower Power groups and were on the brink of wide success. Around this time HP Lovecraft was at its peak touring almost constantly and a stupendous show was recoded on May 11, 1968, (but not released before 91), showing just how great and progressive they were.
Their second album had everything to achieve that goal (including a change of bassist) but they seemed to lack confidence in their own songwriting skills (it is formidably underrated) and again concentrated on covers. The album is incredibly strong and still nowadays quite impressive. However, just after its release, KB man Michaels will leave (exhaustion and loos of musical direction) prompting the group to implode soon after, causing the label to pull its promotional effort.
They tried to reform early 70, but failed (even as they had found anew record deal), but this effort prompted a group with no link to the original line-up (except for drummer Tegza) to record an album as LOVECRAFT (but bearing no resemblance to the first album) and a second album in 75, this time a funky affair. Most of the original members still dabble in music nowadays, around the Chicago area with Edwards and Michaels still playing together in folk circuits. - Hugues Chantraine

H. P. Lovecraft fashioned a hybrid of acid-folk-rock and oddly striking vocal harmonies from two contrasting sources. Band founder George Edwards had been a folk troubadour in Chicago, California, and Florida, and whose repertoire included covers of The Beatles’ “Norwegian Wood” and Bob Dylan’s “Quit Your Low Down Ways”, as well as early songs by Fred Neil and Terry Callier, with both of whom he played in clubs. Vocalist/keyboard player Dave Michaels, who had previously played in jazz groups with David Sanborn, boasted a classical training and a four-octave range.
After covering Chip Taylor’s “Any Way That You Want Me” with members of Chicago band The Rovin’ Kind , Edwards and Michaels became the creative force behind the group. After getting clearance from the executors of the science fiction writer H.P. Lovecraft, they recruited Tony Cavallari (lead guitar), Mike Tegza (drums) and Jerry McGeorge (bass) (who had previously seen the group perform at The Cellar, a dance club in the northwestern suburbs of Chicago [3]). A debut album for Philips, H. P. Lovecraft, soon followed.
Featuring a nine-piece orchestra, it juxtaposed covers such as Dino Valente’s hippie anthem “Get Together” and the early Randy Newman ballad “I’ve Been Wrong Before”, with band-written songs including the jazzy “That's How Much I Love You (More Or Less)” and vaudeville psychedelia in “The Time Machine”. A musical tribute to their novelist namesake, based on his short story “The White Ship”, was drenched in hallucinatory harmonies, droning feedback, baroque harpsichord passages and the chiming of a genuine 1811 ship’s bell.
Edwards and Michaels duel lead vocals distinguished the band's sound - influenced by Fred Neil's earlier work with Vince Martin-the intricate organ and harpsichord work of Michaels, and the propulsive drumming of Tegza. Several of their songs attempted to communicate the eerie atmosphere of the writings of their namesake. Their power and imagination as a live group can be heard on Live at the Fillmore: May 11, 1968, recorded after McGeorge had been replaced by Jeffrey Boyan, and issued in the 1990s.
A second studio album, H. P. Lovecraft II, followed. Although recorded with the band in some disarray, it successfully developed their musical approach and stands as an exemplar of acid rock of the period. Many of the psychedelic effects were apparently created by engineer Chris Huston, previously of Merseybeat band The Undertakers. The album included another song based on a Lovecraft short story, “At the Mountains of Madness,” as well as a contribution from voice artist Ken Nordine on the track "Nothing's Boy", and songs by Terry Callier and others.
In late 1968, Michaels decided to leave the band to return to university, and H. P. Lovecraft effectively collapsed. A spin-off group, Lovecraft, reformed in the 1970s with Edwards and Tegza from the original line-up, but Edwards departed from the group very soon after. The group released two more poorly-regarded albums, but had little connection to the first incarnation of the band.
Edwards has subsequently played in folk clubs as Ethan Kenning, occasionally reuniting with Michaels who also performs as David Miotke. - Wikipedia