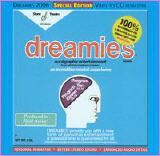 This experiment was intended to redefine people's notions of "pop music." Bill Holt, just past the age of 30, quit his job and devoted an entire year of his life to this ambitious musical collage, which at more than 50 minutes is alternately fascinating and tedious. There's no question that even the most random-sounding bits and pieces here were planned very carefully and put together painstakingly. There are only three real "songs," which are surrounded by and interrupted by spoken news clips and sound effects. The lack of drums dulls the impact of these songs, which are otherwise excellent Beatles-inspired soft-rock. Headphones help; this is not background music and for full effect each album side needs to be listened to without interruption. The long series of Moog bleeps and blips on side two can be really hypnotic if you're in the right frame of mind. Like Kraftwerk, Holt had an understanding of how repetition can be used to alter your concept of what music is. Fans of the Church of the Subgenius should love it. This is one of those albums that you won't listen to often but will really experience in a new way every time you do. Its success is arguable, but its uniqueness is unquestionable. (lysergia.com)

A very cool local Delaware private press of psychedelic folk and sound collages weaving in and out. The cover states that it's "an incredible mental experience" and it's out there! Bill Holt's style was inspired by The Beatles and composer John Cage. The mood of the album reflects the dreams of a young man caught in the middle of the Cold War. From the trauma of President John Kennedy's assassination, through the psycho politics of the 1960's and early 1970's, acoustic guitar, Moog synthesizer, and sound effects from the period are used to paint a hauntingly surreal and beautiful musical tapestry of the times. Side One, Program Ten, and Side Two, Program Eleven deliver over fifty minutes of very personal music that many critics feel was twenty five years ahead of it's time. Rolling Stone writer David Fricke (at the time a fledgling critic writing for The Drummer in Philadelphia), called Dreamies "endless hours of mental entertainment".

Composer Bill Holt created Dreamies using a four track recorder, an acoustic guitar, and one of the original Moog synths. The album cover was modeled after a box of "Total" breakfast cereal. The recording took two years to complete and was done in Holt's home studio in Wilmington, Delaware. It was mastered at the renowned Sigma Sound in Philadelphia (the same place David Bowie recorded his memorable mid-seventies dance album). It was originally sold via direct mail through Rolling Stone magazine. (Fuzz, Acid & Flowers)
Tracklist: