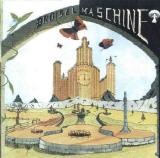 *** Quite possibly the pinnacle of Krautfolk, Broselmaschine is certainly tops in the folk subgenre and is recommended to those interested in the lighter side of Krautrock. Broselmaschine combines the highly talented acoustic guitar playing of Peter Bursch (a master of the instrument who has published many instructional books on the subject), romantic vocals, and a mild Eastern influence highlighted by the use of sitar and flute. The album begins with 'Gedanken', a peaceful track with a slight renaissance-era feel, featuring acoustic and electric guitar, flute and romantic lyrics. Next the group performs the Scottish traditional 'Lassie' with multi-tracked vocal harmonies. Next, 'Guitarrenstuck', is a beautiful piece played with folk guitar and a soothing female vocal. 'The Old Man's Song' seems slightly out of place due to its use of wah-wah peddle, but this gives way to some rather ominous sounding Duul-ish acoustic guitar and folk percussion. 'Schmetterling' introduces an Eastern flavor to the album and is most notable for its sitar which reminds me a little bit of mid-period Popol Vuh. Bursch's guitar playing on this track is simply masterful and the track is given an extra boost from some atmospheric mellotron. 'Nossa Bova' stands out as a folk masterpiece with its incredible guitar work, folk percussion, and female vocals. This track has a peaceful quality similar to Paradieswarts Duul, the only difference being the musical ability of Broselmaschine's members. The album was produced by Rolf Ulrich Kaiser and engineered by Dieter Dierks and was first issued on Pilz in 1971.

*** Bröselmaschine's single album delivers a pretty combination of folk and psychedelia with a noticeable touch of the contemporary German underground. The first four songs highlight acoustic guitar and contrast clear female vocals with more German-inflected male vocals, all very folky and beautiful (the track "Lassie" is even credited to the most prolific composer in the history of music, Trad.). A progressive bent is given by spacey electric guitar work that ranges from atmospheric to wah-tinged fuzziness, fleshed out in long but hypnotically low-key solos with the help of low-key bass, percussion and flute. The two other songs are longer, primarily instrumental jams with more obvious Eastern influences. "Schmetterling" is particularly reminiscent of Mantra-era Popol Vuh with its tablas and congas, sitar drones and even a hint of Mellotron. A very nice album for those who like folky prog.

Originating from traditional folk music, Bröselmaschine were formed in Duisburg in autumn 1968, and were fronted by renowned guitarist, theorist and writer Peter Bursch. The original band, who were inspired by Pentangle (their quote, not ours) and European folk musics, played a mixture of all sorts of cultures. They wrapped vibrant songs in a hybrid of folk, Indian music, psychedelic rock and cosmic musics, all fused together to form a delicate spacious folk-fusion of great beauty. Their style was characterised by Jenni Schücker, who has a most sensual vocal style ideally suited to such music, all ready to wisp us off to the clouds with the "heads flying by" - to quote the surreal psychedelic lyrics of the opening "Gedanken". With the exception of "Lassie" (a minor low-point, being a traditional folk song) BRÖSELMASCHINE is a delightful album, trippy and otherworldly, stylishly Teutonic cosmic folk, not least so in the addition of Dieter Dierks spooky Mellotron, sitars, zither, tablas, and the like. It all adds up to an ideal companion to Emtidi's SAAT or Hölderlin's TRAUM.

This was the project of Peter Bursch, a master of acoustic guitar. Besides the Broselmaschine albums, he has issued several hand books on how to play acoustic guitar. He formed the first Broselmaschine line-up way back in 1968, inspired by the American folk music of Bob Dylan, Joan Baez, Phil Ochs and Joni Mitchell. Some of these people brought with them experiences from Irish and British folklore. During the early seventies the band lived as a commune in Duisburg. Their first album was recorded in August 1971 and released on Pilz. It included six tracks in all, most outstanding was their Steeleye Span-ish version of the Scottish traditional song "Lassie", which came with perfect multi-voice harmonies electric guitar and mandolin. Other tracks like "Schmetterling" had a more eastern flavour with sitar. It is one of the best German folk rock albums ever recorded!

Regretfully Broselmaschine disbanded about a year after this release. Some of the members travelled to India. In 1975 Peter Bursch formed a new Broselmaschine, now dubbing themselves 'Peter Bursch & Die Broselmaschine' They were helped by Mani Neumeier and Roland Schaeffer from Guru Guru and Jan Fride from Kraan on a new LP project. In spite of these guest appearances, the resulting album was still in a clearly defined folk style, although quite different from the 1972 album. 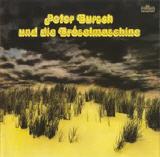 Not too many collectors will be lucky enough to find this little obscurity as it has never been reissued [Reissued 2005]. Those who seek it out should be made aware that sadly, this is not a rehash of the group's incredible 1971 debut. I liken it to Ax Genrich's (Guru Guru) equally obscure 1975 solo LP 'Highdelberg Supersession'. Peter Bursch and Willi Kissmer, the only remaining original members, formed the new Peter Bursch Und Die Broselmaschine in early 1975. The resulting self-titled album was recorded between February and July of that same year in Conny Plank's Neunkirchen Studio. The album features guest appearances by Roland Schaeffer and Mani Neumeier (Guru Guru) and Jan Fride (Kraan). The resulting music, while still retaining a strong folk-rock tendency, is much different than the atmospheric folk which dominated the legendary 1971 album. There are a few similarities however, most notably the inclusion of three traditional tracks ala 'Lassie' and the abundance of "ethnic" percussion. Musically, the emphasis is placed on Peter Bursch's highly talented acoustic guitar techniques, although Willi Kissmer's electric guitar steals the show at times. Standout tracks include 'Sofa Rock', a six-minute instrumental folk-rock jam with ethnic percussion, and 'Come Together', a laid-back track highlighted by flute, idyllic vocals and dreamy guitar passages. Peter Bursch Und Die Broselmaschine is well worth tracking down if you are a fan of the first album. (Krautrock Album Database) 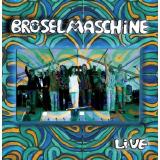 The name of the group goes back on a cannabis-comminution apparatus and the noise of a motorcycle which belonged to a friend of the group member Jenny Schücker. The first equipment was before in the possession of the music group Procol Harum. The group members lived in a commune in Duisburg and heard end of the 1960s to the German rock bands of the first hour. Peter Bursch, Lutz Ringer, Willi Kissmer, Helmut Loeven, Jenny Schücker, "Schimi", Michael Helbach, Angelika Theus, Heinz Gutt and Michael Schmidt belonged to the first lineup. The group was involved in different subkulturellen areas (Head shop "Knubbels Garten", underground magazine "Der Metzger").

The group belonged to the initiators of the selfadministered cultural centre and communication centre of Eschhaus.

Though the group resolved in 1973, but there occurred several new formations: In 1974 the second formation, in the end of 1975 the third formation. Other formations followed till 1984. Since December, 2005 the group stands again (to a great extent identical with the formation of 1975) on the stage.

In May, 2008 the group has published a new CD on the concert recordings of the "Herzbergfestivals" and the "Rockpalast Concert from Bonn".