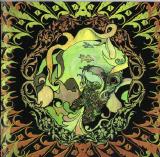 Circulus - The Lick On The Tip Of An Envelope Yet

A fanciful blend of traditional British folk, prog rock, psychedelia, and folk-rock, with a cultural mindset that is rarely seen outside of a revival screening of The Wicker Man, Circulus is the brainchild of Michael Tyack, a songwriter and musician who has set out to create music that exists in the 20th and 16th centuries at once. Based in South London, with Tyack the only constant member after dozens of personnel shifts, Circulus incorporate the drums, guitars, and Moog synthesizers you'd expect from a rock band with a retro early-'70s approach, but also features a variety of medieval instruments, including crumhorns, recorders, and a reed instrument called the rauch pfeifer, whose intense volume Tyack declares "isn't really acceptable to modern ears." Circulus are nearly as well-known for their collective fashion sense as for their music, with Tyack costuming himself and his accompanists in thrift-shop capes, caftans, hats, and masks that are equally influenced by the British hippie scene and Tyack's self-proclaimed model in style, Philip the Good, who was the Duke of Burgundy in the 13th century. Add to this the stated belief of Tyack and his bandmates in pixies, fairies, and "old gods" and you get a group whose reputation for eccentricity precedes it, but Circulus have also won a loyal audience for the strength of their music, with fans ranging from traditional music enthusiasts to death metal addicts. Circulus made their recorded debut in 1999 with an EP entitled Giantism, but it wasn't until 2005 that the band found a sympathetic record label interesting in financing an album-length recording — Rise Above Records, an extreme metal label that issued Circulus' full-length debut, The Lick on the Tip of an Envelope Yet to Be Sent. A second album, Clocks Are Like People, followed a year later.

First, the obligatory disclaimer: A Lick on the Tip of an Envelope yet to Be Sent is not typical of the CDs that Candlelight distributed in 2005. Think of Candlelight in the mid-2000s, and the word that usually comes to mind is "metal" — sometimes death metal and black metal, sometimes power metal, sometimes thrash metal, sometimes metalcore, but usually something metal-related. This 2005 release, however, has nothing whatsoever to do with metal or even hard rock. Instead, Circulus offers an intriguing, mystical, and very eccentric blend of British folk, psychedelic rock, progressive rock, and medieval music. One hears a lot of '60s and '70s influences, ranging from Jethro Tull to the Fairport Convention to Pink Floyd to the Moody Blues — only Circulus is much more bizarre than any of those bands. This trippy effort doesn't run away from the stereotypes of either psychedelic music or medieval folk; instead, the London-based Circulus affectionately embraces those stereotypes, and the end result is a disc that is bound to be loved by some and mocked by others. But the band's odes to fairies, pixies, and scarecrows — although highly self-indulgent at times — still have a lot of meat on their bones and can be strangely charming and even ethereal. There is definitely a method to this madness, and the Londoners' ability to find some parallels between the '60s and '70s and the 13th and 14th centuries speaks well of them. Of course, that type of thing isn't unprecedented; Ian Anderson brought a strong medieval influence to Jethro Tull's psychedelic explorations long before Circulus existed. But again, Circulus is much stranger — and A Lick on the Tip of an Envelope yet to Be Sent offers considerable rewards to those who are broad-minded and patient enough to go along for the ride.