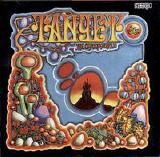 Ry Cooder's Ceyleib People are arguably one of the more innovative groups of the late 60s. Taking the loping blues romp of Captain Beefheart and filtering it through Indian music, the group created a very short album, what would be an EP now, of two 10-11 minute parts. For 1967, this is definitely hippy experimental music, hopping from guitar riffs to sitar drones to mellotron rambling and back without regard for convention. It's almost as if there was an intent to fuse the influences of Ravi Shankar with those of the old blues legends, except that rarely is there any true juxtaposition of both styles, instead one will start out and then give way to another, segment by segment. It's as if someone gave a studio the masters for several Ravi Shankar and Captain Beefheart albums, asked them to splice them together, and then left, only to have the engineer play a joke by adding parts of Days of Future Passed in as well. Overall, it's a pretty successful experiment especially considering its age. The reissue of the album gives you two new versions of the two pieces, "Aton" and "Aton II," supposedly processed, but not really sounding all that much different from the first two. While this might not have been so impressive had it been from a few years later, its presence in 1967 is quite prescient.