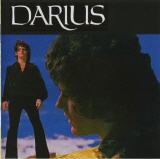 Darius was based in Hollywood, California and was backed by Goldenrod and Mike Deasy. The album is all originals and the music very melodic with upfront vocals and a style veering towards progressivism. Particularly stunning are Mist-Veiled Garden and I Feel The Need To Carry On. Funk and blues influences are more evident on Side two of the album.

The 45 was taken from a projected second album on Chartmaker, Hello Stranger, which was never released.

Darius went on to record a 45 for Metromedia as Bobby Joe Ott, Flint River Inn, but the company was bought out by Bell, and the track sank in the changeover.

He then returned to his home town of Cleveland, Ohio and under the name of Darius James played the club circuit. In 1974 a bad automobile accident put his musical plans on hold and he spent the next six years having re-constructive surgery. In 1980 he put a band called The Earthlings together and went back to Hollywood to play the Showcase Club Circuit and despite many recordings, no deal was forthcoming.

In 1990 Darius went back to Cleveland and met Barbara McFaul aka: Honeygirl. He then concentrated his efforts on recording and producing Honeygirl, also producing/directing three music videos with her.

In 2000 he started singing/writing and recording again along with Honeygirl and The Earthlings...