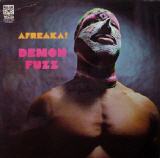 AMG Review: DJs like Gilles Petersen have been hip to the seven-piece wonder band Demon Fuzz for years, and as of the 21st century -- now that everybody's put away their James Brown records for sampling -- other club jocks are getting into the act of sampling this incredibly rare LP. Afreaka! was the only release by Demon Fuzz. Released in 1970, Afreaka! is a wild mash of Afro-Latin funk, breakbeats, tripped-out soul, jazz fusion, and psychedelic journeying. These seven black musicians took on everything that was happening, and were musicians enough to make it work for them. This CD reissue by Castle/Sanctuary includes the entire original album plus their three-track EP whose A-side was "I Put a Spell on You." Yeah, there are vocals on this set, but they are far from a distraction. Imagine the early Santana band mashed hard on the mouth by Fela, Sly, and mid-'60s Blue Note soul-jazz -- and having heard prog rock. Oh yeah...heavy, demented, and so out there that it's timeless. Had they heard this when they did their mighty Root Down EP, the Beastie Boys would have released a very different record. Most tracks run in the eight- and nine-minute range and get down with tough drums at the core, with rhythmic shifts happening on a grooved dime. Killer horns, Hammond B-3s, electric guitars, and deep tough slinky funky bass all wind together to create a mix so utterly intoxicating and fluid that it's difficult to take in one listen -- check out the Eastern mode sax solo on "Another Country" or the stomp-and-slide greasiness of "Past Present and Future." And as for the Screamin' Jay Hawkins cover, it's like the Meters jamming with Osibisa! There's also a fine extended voodoolicious psych-soul cover of Ray Harris' R&B classic "Mercy" (subtitled "Variation No. 1"). This is the real deal -- solid, freaky-deaky, and groove-centric. Not to be missed.
Progarchives Review: A bit like Osibisa and Assagai, the band is an aggregate of African black players forming in London's Swinging Sixties an amalgam of musicians that could play under three names: Skatallites (thus exploiting the Jamaican group), The Interstate Road Show or Sarah Gordon's House Of Bondage (for the seedier clubs of London) before getting signed by manager Barry Murray and landing on Dawn label, along with Comus and Mungo Jerry, both under Murray's protection. Blessed with a very strange mask artwork, DF's sole album at least had an excellent name, although borrowed from jazz circles.
Right form the first notes of the opening lengthy instrumental Past Present And Future, you just know you're on different trip than usual, with the huge bass and guitar duo scaling up and down the drama Spanish with Flamenco/Corrida chords, before taking off in an unexpected brass rock joyful explosion, lasting the next 8 minutes (out of almost 10). Very different in the following Disillusioned that has a much more BS&T flavour without having its heavy cheesiness or one of Chicago's many good moments on the first three albums. During a lengthy harmonica solo, the group seems caught in a vinyl skip (as if the needle was stuck), the group seems stuck in a repetitive 7/4 time sigs that haunts you for minutes after its gone. Another lengthy track takes another brass rock road, not far from What If would be doing, but suddenly the mood shifts to an Arabian seedy night club with the sax leading the way, slowly developing its Coltranian wings (not visible/audible at first)
The flipside (let me dream I have the 33RPM) starts on the flute, bass and organ gliding thru space, before chants and other disrupts them and start in the plaintive Hymn To Mother Earth proper. The track soon develops one of the most haunting organ sustain line around, while the tension keeps climbing Awesome. The album closer, the almost 10-mins Mercy(variation N°1) starts with an almost African voodoo beat and soon again haunts the corner of your mind especially when the brass section solo simultaneously going in different directions and the percussions and drums drive you mentally insane into following their wild rhythms over a wild sax. What a frigging exit to this album.
Stuck on as bonus tracks are the just as-rare maxi-single (this furiously recalls Comus and its "album and maxi-single" thing, and guess what??? The bonus maxi-single tracks bring as much added value to the original album as it did with Comus. Starting up is yet another great cover of SJ Hawkins' I Put A Spell On You (I don't think I've ever heard a cover of this track I didn't love), which was at the base of a payola scandal. The Message To Mankind return to a If or BS&T style of brass-rock, a fine tune, but seemingly a tad hastened midway through (uncaught glitch or normal twist?? >> go figure, it seems repeated later). The flipside of the maxi-single holds the lengthy Fuzz Oriental Blues, which a great instrumental wher the Hammond lays king for eternity!!!
Apparently the group also embarked a UK tour called The Penny Concerts with Comus, Titus Groan and Heron (es-ISB) >> How I wished I'd seen that!! In either case, Demon Fuzz's sole album is probably of on the label Dawn best artistic success (with the undisputable Comus topping that list) and the Cd reissue with its bonus tracks should absolutely discovered by all progheads.