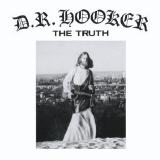 It’s inviting to view a decade as a granite block of time that defines everything that happened during one ten-year period and differentiates it from the decades that preceded and followed. In reality, each decade bleeds into the next, and the styles and thoughts and concerns of one decade carry (if ever so briefly) into the next. Perched perfectly between the psychedelic 60’s and the singer-songwriter 70’s, The Truth combines the best of both sounds into a heady brew of phased guitars, wah wah pedals, processed vocals and cryptic imagery.

Recorded in 1972 in New Haven, Connecticut, this album was originally released as a private pressing through D.R. Hooker’s own On Records label. “Released” is perhaps too strong a term – Hooker had a small batch of the album minted to give away to his friends. Like many rare, oddball records, original copies of this LP have taken on astronomical pricetags in recent years. But unlike some rarities, whose main selling point could be summarized in a Supply Vs. Demand graph, this is actually a lost gem that deserves to be heard.

The album has vaguely religious overtones, but the main theme that runs through it is the wonder of nature, and mankind’s relationship with the earth. It opens with the sound of ocean waves crashing, and also uses thunder claps and squawking seagulls to bring a feeling of the great outdoors to the music. The album is “Dedicated To Mother” and it doesn’t take a fertile imagination to conceive that the mother Hooker was actually dedicating this work to was Mother Earth.

And what a creation it is: ‘Forge Your Own Chains’ is one of the most interesting songs ever written about the perils of drug abuse. ‘Hello’ sounds like a late-era Doors outtake. ‘The Sea’ uses a driving backbeat and plenty of effects to build a swirling, spooky classic. There are many great moments here, and they add up to an album that is totally of its era, yet perfectly timeless. - dkpresents

One of the rarest US psych LPs, The Truth, recorded in Connecticut in 1972, might very well be the ultimate North American acid rock album ever.

Everything is absolute perfection, the wailing fuzz guitar, the psychy arrangements, his awesome voice, layers of instruments and well-crafted songs. One of those LPs that keeps revealing new depths even when you've played it a hundred times. True psychedelia. - dj fanis

One of the rarest U.S. psych albums, previously issued on CD by Subliminal Sounds, now in a beautiful and legit 180 gram vinyl LP reissue. The Truth, recorded in Connecticut in 1972, might very well be the ultimate North American acid rock album, ever. No hype here -- just incredible music. Tempting as it is to exaggerate the worth of such obscurities, The Truth deserves every plaudit that comes its way, making it astonishing that there was no real band to speak of. Instead, ten musicians are credited alongside the mysterious Donald Hooker, who wrote, sang and played lead on the album. Culled from the local music scene, they rehearsed only briefly before entering the studio. Tom Kobela, who played dobro on this record, remembers that Hooker "was a very likable, long-haired fellow" who "wore robes, which was pushing the dress code conventions even then." Despite his wasted appearance, though, he knew exactly what he wanted in the studio. Heralded by an eerie hoosh, the first track exemplifies the albums sound: a strong melody, funky drumming and percussion and piercing guitar, underpinning oddly philosophical, quasi-Christian lyrics. Some songs are mellow, while others rock hard. Other highlights include the irresistibly funky "A Strangers Smile" and the beautifully structured "This Thing." But the albums masterpiece is the unforgettable "Forge Your Own Chains," whose smoldering groove, enlivened by delicate synth and atmospheric brass, provides the backing for Hookers admonitory lyrics about the iniquities of substance abuse. This is one of those albums that keeps revealing new depths even when youve played it a hundred times. Connecticut hippie-philosopher concocts homemade lounge-psych masterpiece. True psychedelia! Includes a poster in a limited edition of 500 copies. - Subliminal Sounds

Widely cited as one of the most important private press releases in all 1970s psychedelia, D.R. Hooker's The Truth might actually be one of those obscure lost gems that's worth the customarily inordinate amount of interest such period pieces are afforded. D.R. Hooker was a man slightly askew with his time: from the robes he wears on the cover to the quasi mystical lyrics, he's very much connected to the hippy era, and given that this album was recorded in 1972, in a time post-Charles Manson, he was brave to associate so strongly with all the imagery pertaining to cults. Musically, Hooker looks beyond the parameters of the hippy movement, dipping into a more ambitiously studio-oriented sound than Hooker's half-troubadour, half-prophet image on the sleeve might suggest. The noisy, fuzzy elements are particularly effective, and surprisingly intricate in their arrangement and recording. 'Forge Your Own Chains' takes this to an extreme, expertly deploying advanced loungey jazz figures with an onslaught of brass. This all sounds far more ambitious and accomplished than the vast majority of private press releases that tend to emerge, and there's certainly a strong case to be made for this record being one of those precious few curiosities from the private press movement to feel like more than a kitsch comic aside. Well worth your investigation.