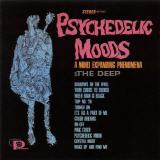 The Deep's Psychedelic Moods (1966) is probably one of the most fascinating and sought after psychedelic albums of all time, and this Radioactive reissue of the incredibly-rare stereo version is the one that all collectors want to own.

This was a Philadelphia-based studio-only project. The album, which is an extremely rare and quite costly collectors' item, has until recently been shrouded in total mystery. It was produced by Mark Barkan and Rusty Evans. Both were also involved in Freak Scene whose album Psychedelic Psoul (CBS 9456) 1968 is virtually a second Deep LP. We also know thal David Bromberg was involved in the project. The other personnel listed above have been deduced from songwriting credits and may also have been involved.

Their album is very strange, full of weird sound effects, haunting vocals and acid-soaked lyrics. It is based on a psychedelic folk format. Some, such as Color Dreams and Your Choice To Choose, sound very Seeds-like. Others, like Shadows On The Wall and Wake Up and Find Me are haunting acid ballads.

(from Wake Up and Find Me).

Arguably the best two tracks are Turned On and Psychedelic Moon - which are both very odd. The album is recommended listening. Fans of the band will also be interested in a series of outtakes released on CD by Collectables, Part 2 and Part 3 contains alternate takes and unreleased tracks which were recorded in 1966), whilst Part 4 (which also features tracks by Hydro-Pyro) and Part 5 are now also available on CD through Collectables.