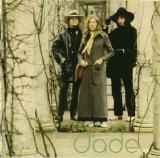 Review:
*** The British folk-rock trio Jade made one obscure album in 1970, Fly on Strangewings, that might have sounded closer to 1968-1969-era Fairport Convention than any other record not by Fairport themselves. Jade's lead singer, Marian Segal (who also played acoustic guitar), had a very similar voice and style to that of Fairport's woman singer of the late '60s, Sandy Denny. Too, Jade blended parts of modern folk-rock and traditional British folk in their songs, vocal harmonies, and arrangements. Jade were not as big on traditional British folk as Fairport were by late 1969, however, recalling the Fairport albums What We Did on Our Holidays and Unhalfbricking far more than the later 1969 Fairport record that took a more traditional direction in repertoire, Liege & Lief. Jade were also a wee bit more pop in their songwriting and arrangements (which occasionally used orchestration) than Fairport, their inevitable point of comparison. While Fly on Strangewings isn't as strong or original as Fairport Convention's early albums, it can be heartily recommended to anyone who loves the sound of early Fairport with Sandy Denny on vocals, and wants something in a very similar style.Jade's Marian Segal had been in a school band with future Fleetwood Mac guitarist Danny Kirwan, and began singing in London folk clubs around 1966. In 1967 she formed a duo with singer, fellow acoustic guitarist, and banjo player Dave Waite; he'd formerly been in the folk group the Countrymen, who had a minor British hit single in 1962 with "I Know Where I'm Going." By the end of the 1960s they'd moved away from traditional folk to contemporary material and original songs, and were managed by Jon Miller, who was in partnership with famous British music publisher Dick James. They got a deal with James' DJM label and Miller, who'd produce Jade's album, introduced them to singer and keyboardist Rod Edwards, who became the third member of the band. Moving to a more rock-oriented sound, the album benefited from session work by several noted musicians of the time, including Michael Rosen (who'd been in the underrated British folk-rock group Eclection), Pete York (of the Spencer Davis Group and Hardin & York), Terry Cox (of the Pentangle), Pete Sears (later of Jefferson Starship), top U.K. session drummer Clem Cattini, and Mick Waller (who played with Jeff Beck and Rod Stewart during that period).While their debut album had come out in the U.K. in mid-1970 under the name Jade, there was another group of that name in the U.S., so the album was billed to Marian Segal With Silver Jade when it was issued by Bell in America in mid-1971. The group toured the States in the summer of 1971, but split up that autumn, by which time Segal was working on an unfinished solo album. Segal and Waite continued playing as the Marian Segal Band with other musicians for a few years, but didn't get a recording deal before they split up in the mid-'70s. Fly on Strangewings was reissued on CD in 2003, with both sides of an unreleased 1971 single (on which John Wetton plays bass) added as bonus tracks. ( All Music ).