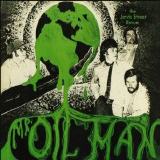 This outfit came out of Thunder Bay, Ontario, between 1970-71. Horricks and Stevenson had earlier been with the Toronto-based Plague and Horricks followed this with a spell in Lexington Avenue. Faulconer had been with the Winnipeg-based Satan and The D-Men. The second two 45s are non-LP. The album is predominantly heavy rock with psychedelic overtones. There's a definite influence of Hendrix in the music and green politics anti-business influence in the lyrics. Their style is typified by the title track which is ambitious but disjointed, taking up most of side one. The rest of that side is taken up by Mr. Business Man, another heavy rocker with some catchy high pitched guitar. The band are at their most psychedelic on Sally's Hymn and 20 Years has a haunting intro and some nice brass. It achieved minor hit status when issued as their first single. The album changes hands for lots of bucks but there has been a limited reissue on both vinyl and CD. (vernon joynson)