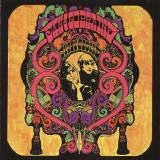 Jan Hendin and Lorraine Lefevre are a British duo, surrounded by top-notch studio musicians, whose album, one of considerable variety and personality, was released only in the United States. It’s wholly original and unlike a lot of singer/songwriter types of the era, they had considerable creative input. They wrote seven of the ten songs, and the other three were written for them. They play all of the guitars on the album, and also some keyboards, and are credited with “ensemble arrangements.”

While it’s probably not the ultimate femme psych masterpiece collectors like myself go out of their minds looking for, it’s pretty darn close. It’s a reasonable cross between British folk-rock and American psychedelia (with a strong Indian influence), and is the most interesting and successful album by a folk-psych duo, male or female. It also rocks with conviction, and while it does contain two off-the-wall experiments it doesn’t lose its focus. More importantly, unlike virtually every late 60s/early 70s album by women, there’s not a song here with a bland or simplified arrangement. More to the point, there's no song or arrangement that seems to have been thrust upon them by a sales-happy label or producer. They never opt for the easy way out, erring on the side of daring rather than on the side of omission. Even the two orchestrated ballads avoid the traps of mainstream pop, as the strings create an eerie atmosphere not far off from the sitars and effects elsewhere. The women’s voices are high and a little thin when apart, but rich and evocative together, even when one or the other hits an unlikely note here or there. They’re full of substance. Throughout there’s an exciting “anything goes” feel that makes the album more than the sum of its excellent parts.

The opening “Break Out The Wine” starts things off with vigor; it’s a powerful rock song with terrific drumming and lovely vocals. The only remote concessions to folk are the acoustic rhythm guitars, which are strummed so hard that they’re louder than electrics. In the first of the album’s many clever and creative arrangement touches, the song changes tempo near the end, then changes chords. It’s a surprising way to end the song, and sets the stage for the many unusual ideas to follow. The next two songs, “Bird of Passage” and the title tune, are both ragas. The slightly extended “Gypsy People,” in particular, is something special. The rhythm section on it is fantastic; a full drumset augments (and often overshadows) the tabla and the bass playing, by Brian Odgers, is outrageously high and even speedier than the rhythm guitars on “Break Out The Wine.” It’s somewhere between REVOLVER and FOREVER CHANGES, and more nimble than either. After “Foolin’ Myself,” a brief and moderately dramatic ballad, side one ends with the song most likely to rankle psych fans, “Olde Tyme Movie.” With its car horns, kazoos, slide whistles, and scratched-vinyl effect, it’s the kind of post-“When I’m Sixty-Four” music hall song that normally screams out “bandwagon.” All I can say is that it’s really well done, and feels true to Lorraine’s musical roots. If you’re not inclined to like it, you probably won’t. I’m fine with it; I also like the many similar songs done by the Kinks.

Side two gets back down to business with “Life’s Parade.” Its jarring stops, whispered lyrics and gypsy-like backing vocals are angelic and powerful. It also benefits from further outstanding bass playing by Odgers. “Snow Roses” is another brief ballad, with delicate acoustic guitar work, and subtle deeply echoed backing vocals (via mellotron?) that are even more effective than those on the previous song. Side two’s centerpiece, though, is the nine-minute “The Assignment Song – Sequence,” written by Jan. Like “Break Out The Wine,” it’s a straightforward folk-rock song with emphasis on the “rock,” anchored by that terrific rhythm section. After a while, the singing ends but the groove continues on. A simple, but effectively freaky, guitar solo gains power as the drums stick into a repeated set of rolls (the song’s unusual ¾ construction makes it sound like almost like the record is skipping.) Before you know it the rolls continue straight on without stopping and the intensity level hits a tremendous peak before the song ends not with a bang but a whimper. It comes apart at the seams, ending with each instrument letting out a few quiet gasps. It’s followed by another oddity, the brief “Number 33.” It is sung by a very young girl (Jan’s sister? Her daughter?) I dig it. You might not. Unlike “Olde Tyme Movie,” though, it isn’t silly. It’s downright creepy, like a child’s nightmare, with a metronome-like beat, more echo-happy backing vocals and lyrics such as “I went up the apple tree/all the apples fell on me.” The ominous tone continues on the final song, “Don’t You Feel Fine,” whose jarring shifts from major to minor keys and dissonant vocal sections belie the positivism of the lyrics. “Have you ever know the pleasure of giving for the sake of getting nothing/loving for the sake of knowing pleasure/knowing for the sake of teaching others” is a great sentiment, but it’s sure backed by a moody melody. Fittingly, a stray bass note ends the song and the album.

The vocals throughout are always agreeable, but daringly and impressively stop short of being truly “pretty,” with “Don’t You Feel Fine” being the most glaring example. It’s many levels above the sunshine pop that was in the charts at the time, which surely made it impossible to market; the irony is that its artistic success probably assured its commercial failure. Like the most well-known femme psych artists (Lily & Maria, Wendy & Bonnie, Linda Perhacs, Nancy Priddy, Feminine Complex, etc…) the album is a one-shot. It’s a mystery why it isn’t better known now.

ALBUM:
1(A) GYPSY PEOPLE (ABC ABCS 691) 1969
On their album, which is folky with a psychedelic taint rather similar to Trees who came a year later, the duo are backed by half a dozen session musicians. The better tracks include The Assignment Song Sequence and Life's Parade.

This is British duo Jan Hendin and Lorraine Lefevre, and their superb collection of acid-tinged folk and pop has been acclaimed as one of the best female psychedelic albums of the late 1960s, with contents varying from fragile ballads to rousing rock and roll, set to complex arrangements and gorgeous vocal harmonies. Recorded in London but only released in the US and Canada, it features support from musicians including Terry Cox (Pentangle), Brian Odgers (Al Stewart, Van Morrison, John McLaughlin, John Surman), Keshav Sathe (Magic Carpet) and legendary session drummer, Clem Cattini. Amongst the most enigmatic recordings of its time and full of mostly original songs (and one song co-written by Davy Graham), it makes its long-awaited CD debut here complete with explanatory liner notes.