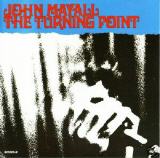 Recorded just after Mick Taylor departed for the Stones, John Mayall eliminated drums entirely on this live recording. With mostly acoustic guitars and John Almond on flutes and sax, Mayall and his band, as his typically overblown liner notes state, "explore seldom-used areas within the framework of low volume music." But it does work. The all-original material is flowing and melodic, with long jazzy grooves that don't lose sight of their bluesy underpinnings. Lyrically, Mayall stretches out a bit into social comment on "The Laws Must Change" on this fine, meditative mood album.

John Mayall was best known as a key figure in the '60s British blues boom, fronting a band containing future members of Cream, Fleetwood Mac and Colosseum among others. However, after releasing a number of rock-edged electric blues albums, Mayall changed direction in 1969. Recorded live at New York's Fillmore East, 'The Turning Point' finds Mayall fronting an all-acoustic four-piece including guitarist Jon Mark and sax player Johnny Almond, who would later gain renown as the progressive rock outfit Mark-Almond. With the new format allowing for a greater degree of subtlety, Mayall offers a blend of blues, folk, and jazz, seamlessly mixed into a new paradigm. Lest you forget that this was 1969, things open up with the pro-pot anthem "The Laws Must Change." The centerpiece of the album, and a Mayall concert staple thereafter, is "Room to Move," a breathless, frenetic number where Mayall shows off his harp chops and gets the audience worked up as only a real blues man can.