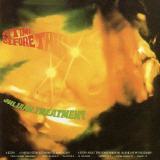 The Dominican-born science fiction and technothriller writer Julian Jay Savarin first tried his narrative hand on this science fiction concept album, based on an elaborate storyline that he would later turn into a trilogy of novels. A Time Before This is psychedelic proto-progressive typical of the time, led by Savarin's Hammond, and accompanied by a rather subdued fuzz guitar, drums, bass and a bit of flute and vibraphone. Like with many of these contenders, Savarin's musical pack is a motley collection of blues, late-60s pop melodies, a little jazz and some modal soloing over thumping bass/drums ostinati, but also dark, almost gothic touches of quasi-classical organ interludes and melodies. The ace in Savarin's hand is the Australian vocalist Cathy Pruden who can handle both the mellow pop cooing of "Altarra, Princess of the Blue Women", the melodramatic spoken interludes, and the Valkyrian wailing of "Alda, Dark Lady of the Outer Worlds" and "The Black Tower" with implacable authority. These last two songs and the title track form the progressive core of this album, achieving the best balance between dark keyboard melodies, Pruden's vocal dramatics and all kinds of rhythmic and harmonic detours. The others tend to be somewhat more pedestrian in either melodic writing or structural development. Like them the overall picture of this album is that it is nice and has certain charm, but that it has not aged terribly well. Savarin's original plan called for a trilogy of albums to tell his whole storyline, but the band dissolved soon after the release of A Time Before This, and it was only in 1973 that he released the follow-up Waiters on the Dance under his own name. - Kai Karmanheimo, New Gibraltar Encyclopedia Of Progressive Rock

The brainchild of this musical project was Julian SAVARIN who was born in Dominica and moved to Britian in the early Sixties. He was impressed by the London music scene and decided to form his own band to start his ideas about a SF trilogy he was working on. He started rehearsing with John Dover (bass), Del Watkins (guitar), Jack Drummond (drums) and Cathy Pruden (vocals). In june '70 the label Youngblood released their first album "A Time Before This". But due to problems of management, promotion and money JULIAN'S TREATMENT had to demise. Julian returned to writing, concentrating on the second part of his trilogy he had in mind. Two years later Julian was approached by Birth records to make a new album. Only bass player John Dover came from the old line-up, other musicians of JULIAN'S new band were Nigel Jenkins (guitar), Roger Odell (drums) and Jo Meek (vocals). In '73 the second album "Waiters On The Dance" came out, credited by Julian J. SAVARIN. Again, there was a total lack of promotion and exposure. Nowadays these two albums are very healthy priced collector items. But we don't have to worry about what happened to JULIAN, he has became a famous writer. First in Japan and later worldwide he succesfully published lots of novels (for instance: Waterhole, The Quiraing List, Naja and Hammerhead)...
The music is build upon the expressive and powerful vocals of Cathy Pruden and the compelling keyboards of Julian (lots of organ and some Mellotron). Some songs feature fine electric guitarwork. Imagine a psychedelic/gothic EARTH & FIRE but at first this is very unique music and it deserves a wider audience. - ProgArchives.com

The first and only album (a double one) by this band is a lost and overlooked treasure from the British progressive rock scene of the early 70's. The band was lead by organ-player and sci-fi writer Julian Savarin, who wrote all the lyrics and music. The album had a very ambitious concept about a man from Earth who comes to the planet Alkon where he meets a female-creature named Altarra (the Earth had obviously been destroyed before this happened!). The whole story and album is divided into 12 chapters (songs), none of them are bad. Although the songs usually aren't all that long, they have a fair amount of time-changes and different parts that will keep any progressive listener satisfied. The sound is very dominated by the excellent and sometimes spacey organ playing of Savarin who had a very tasty sound on his organ. But there's also some flute, vibes and guitar in addition to the bass and drum. Cathy Pruden sings all the vocals, and her clear female-vocals add some more distinctiveness to the music. Highlights includes "Black Tower", "Altarra", "Twin Suns of Centauri/Alkon, Planet of Centauri" and the instrumental themes "The Coming of the Mule" and "Terran". The concept of this album was originally intended to continue on two following albums, but the band did unfortunately disband before that happened (a fate quite similar to Mandalaband and their "The Eye of Wendor" project). But Savarin released a solo-album called "Waiters on the Dance" in 1973 that was the continuation of the story on "A Time Before This". I haven't heard that one, but I've been told that it is in a similar vein and just as good. I'm sure any lover of early 70's prog will enjoy "A Time Before This". - VintageProg.com

Julian's Treatment is yet another forgotten and obscure gem of progressive and psychedelic rock. Not very often does a sci-fi author involve himself with music. Michael Moorcock's involvement with Hawkwind is one of the best examples. And Julian Jay Savarin is another author who involved himself in music, with this band Julian's Treatment. Savarin played the organ and he had an Australian named Cathy Pruden to handle the vocals, with some other guys to handle the guitar, bass, drums, and flute (no liner notes were included, unfortunately).
A Time Before This, released in 1970, was the one and only album by this band (Savarin released an album under his own name called Waiters on the Dance, which varying sources say was released in 1969, 1971, or 1973). Unsurprising, the album is a sci-fi concept album, a bit difficult for me to follow when a lyric sheet wasn't even included, but it seems to involve the destuction of the Earth in which a Terran ends up on a planet inhabited by strange, blue-skinned people, and an evil megalomaniac. Musically, it's late '60s sounding psychedelic with progressive rock with great spacy organ and a cosmic feel to the whole album. Great female vocals as well with the occasional spoken dialog. Highlights include "Phantom City", "The Black Tower", "Altarra, Princess of the Blue Women", "Twin Suns of Centauri", "Alkon, Planet of Centauri", "The Terran", "Fourth From the Sun", and "Strange Things".
All the music sounds like it should belong on some campy sci-fi film from the late 1960s, but that should not come as any surprise. One band that Julian's Treatment gets compared to is The United States of America, the American band that released an self-entitled album in 1968 that featured Joe Byrd and Dorothy Moskowitz. Also comparisons to such prog rock bands lead by female vocalists like Analogy, Sandrose, and Holland's Earth & Fire are pretty common as well. Which is safe to say, if you're a fan of any of these groups, chances are you'll like Julian's Treatment, a great lost gem that sure to grow on you. It's been reissued on CD twice, first by See For Miles which included bonus tracks from Julian Jay Savarin's album Waiters on the Dance, and by Akarma, with no bonus tracks, but excellent, miniaturized LP-style packaging. The original LP (released in Britain by Young Blood and in the U.S. on Decca) isn't exactly easy to come by, but regardless, this album is another excellent obscure gem to add to your collection - Music Reviews - UK - Hippyland

Julian Jay Savarin was a British author who wrote his share of music. In the early '70s, he also involved himself in music, by applying his sci-fi know-how to lyrics and playing organ. He assembled a band called JULIAN'S TREATMENT, with him on organ, Australian-born Cathy Pruden on vocals, and a couple other guys handling the usual (guitar, bass, drums, flute). "A Time Before This" originally released in 1970 on the Youngblood label, is an interesting combination of prog and late '60s psychedelia, with spacy organ, and of course, sci-fi oriented lyrics. I've heard this band compared with everything from EARTH & FIRE to SANDROSE to The United States of America (the late '60s psychedelic electronic rock act with Joe Byrd and Dorothy Moskowitz).
"The Coming of the Mule" is an instrumental piece with guitar that sounds like it came off a FOCUS album, as well as classically-influenced organ. "Phantom City" has more of that late '60s psychedelic vibe, complete with phasing (like you hear from the Small Faces' "Itchycoo Park" or the BEATLES' "I Am the Walrus"). "The Black Tower" is a bit more laid back, showing that Cathy Pruden was truly the lady for this album. "Alda, Dark Lady of the Outer Worlds" has Pruden singing like an evil lady. "Altarra, Princess of the Blue Women" is another mellow piece, with that cosmic atmosphere. "Fourth From the Sun" has a somewhat more jazzy-bent, especially from the drum department.
Anyways, original LPs of "A Time Before This" don't exactly grow on trees, but recently, Akarma had reissued this on CD with the original artwork, in a wonderful digipak (that is, featuring miniaturized LP-type packaging), but unfortunately they forgot to give us information on who was in the band, or the lyrics to the songs. Also they wrongly give the album a 1972 copyright (perhaps 1972 was the year of the album's American release, which was released here on Decca, with a totally different cover - 1970 was the original British release on Youngblood). Anyway, this is truly a wonderful, forgotten prog/psych gem worth looking for. - Ben Miler, ProgArchives.com