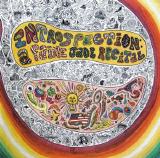 Faine Jade was an East Coast solo artist based around Boston. The album contains two outstanding tracks People Games Play - complete with sounds of the jungle - and the subtle Cold Winter Sun Symphony In D Major. The remainder of the album is experimental, but not outstanding (though some regard it as an absolute classic). It is, however, quite a significant collectable.

It Ain't True is a limited edition release of previously unreleased demos and acetates. Side one consisting of Faine Jade's earlier outfit The Rustics, which led to him and Nick Manzi being signed up as staff writers for Laurie Records in 1966. The Rustics did issue one single on their own label, which also appears on the Distortions album, but towards the end of the year Nick Manzi left to join Bohemian Vendetta. Faine then signed a solo deal with Laurie subsiduary, Providence, which resulted in the Love On A Candy Apple Day 45 with his brother Jeff Jade on drums, and founding Illusion member Bruce Bradt on organ. The 'B' side, It Ain't True, is an excellent psychedelic number.

In late '67, Faine recorded demo versions of Cold Winter Sun and I Lived Tomorrow Yesterday, backed by the Bohemian Vendetta, which led to the deal with New York independent label for the Introspection album. The band also backed him on the album, along with Bruce Brandt and Randy Skrha (who filled in for Jeff Jade - who was in Vietnam at the time). Bruce also co-wrote two of the songs on the album. The recent CD reissue, includes a linking piano section Piano Interlude omitted by the record company at the time because of its uncommercial nature, as well as three album demos, and a nineties tribute to John Lennon.

Where Introspection captures the arguably naive atmosphere of '67, and naked openness that the use of psychedelics represented, Vietnam polarised political opinion, which Faine articulated on a 1969 recording USA Now before moving to Florida and working with the pre-Allmans outfit Second Coming. Later he rejoined Nick Manzi and Bruce Brandt as Dust Bowl Clementine who released one album, Patchin' Up (Roulette 1970), and opened a studio in Long Island.

Faine recently had a local hit with Mario Taxes, a song about the state of affairs in New York.