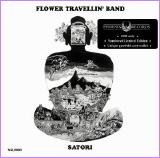 Legit issue of this proto-stoner rock masterpiece! Housed in a limited-edition card wallet of 1,000 numbered copies only. - Wayside Music

Repressed, numbered edition. The Flower Travellin' Band's first musical outing, Challenge, was released in 1970 and was essentially a series of covers of Cream, Hendrix, Big Brother and Jefferson Airplane material. However, Satori appeared a year later and forever changed the way the group would be perceived, both in Japan and in the musical world at large. Possessing the vision to select Akira "Joe" Yamanaka as their vocalist, the Flower Travellin' boys elevated themselves above other Japanese bands of the time, whose efforts were largely confined to imitating British and American bands of the era. Satori, which was released in 1971, is a conceptual hard rock/psych album driven by Hideki Ishima's furious guitar licks which erupt and explode over the harmonic heart beat of the drums and bass and Yamanaka's banshee-like vocal style which was turning him into an occidental Iggy Pop or Robert Plant while the band itself was rapidly becoming Japan's answer to Led Zeppelin. Satori is a huge album in every way. From power chords to Eastern-tinged North African six-string freak-outs and crashing tom-toms, the band flexes its collective muscle from start to finish. In short, this is a real rock classic of the type they simply don't make any more. Housed in a limited-edition card wallet. - Forced Exposure

Possessing the vision to select Akira 'Joe' Yamanaka as their vocalist, the Flower Travellin' boys elevated themselves above other Japanese bands of the time, whose efforts were largely confined to imitating British and American bands of the era. Satori, which was released in 1971, is a conceptual hard rockpsych album driven by Hideki Ishima's furious guitar licks which erupt and explode over the harmonic heart beat of the drums and bass and Yamanaka's banshee-like vocal style which was turning him into an occidental Iggy Pop or Ozzy Osbourne while the band itself was rapidly becoming Japan's answer to Led Zeppelin or Black Sabbath. Satori is a huge album in every way. From power chords to Easterntinged North African six string freak-outs and crashing tom-toms, the band flexes its collective muscle from start to finish. - Flower Travellin' Man

Flower Travellin' Band were an esoteric Japanese classic rock/metal outfit. Influences range from Black Sabbath through King Crimson (they did an early cover of 21st Century Schizoid Man that lacked the brass - for better or for worse). They were probably among the most musically advanced and unique of the Japanese metal movement at the time - Joe, their singer, sounded like Judas Priest's Rob Halford years before the band were even signed. All of the musicians involved were top-notch as well. - Flower Travellin' Band - Wikipedia, the free encyclopedia

Formed in 1967, this japanse proggy-doom heavy rockin' band started their career with 60's West coast acid rock covers under the name Yuya Uchida & The Flowers ("Challenge", 1969). With "Anywhere" (1970 they were in search of their own sound and musical identity, surfing on 70's California rock and on the stoned heavy rock of the Sabbath. Satori (1971) remains their ultimate masterpiece, delivering a really captivating, personal psych-hard rockin' trip with discreet Eastern mystical influences. After this mesmerising stoner rock essay the band released a last album "Make up" (1973). Flower Travellin' Band is definitely a 70's cult psychedelic / space rock standard and a strong reference on the Japaneses underground scene with other psych-proto-metallers as Brush!? and Les Rallizes Denudes. - Philippe Blache, ProgArchives.com

Flower Travelling Band was Japan's answer to Led Zeppelin meeting Blue Cheer and Black Sabbath at the Ash Ra Temple. Simply put, they played grand, spacey, tripped-out hard rock with a riffy base that was only two steps removed from the blues, but their manner of interpreting those steps came from an acid trip. Flower Travelling Band was an entity unto itself. There are five tracks on this set, originally released in 1971 as the band's second album proper. It has been reissued on CD by WEA International in Japan, with the cover depicting a silhouette drawing of the Buddha in meditative equipoise filled in with sketches of an inner universe mandala of the sacred Mount Meru, stupas, and the hash smoking caterpillar from Alice in Wonderland, Japanese sci-fi robot cartoons, and more. And the music is reflected in this inner universal realm on five different sections of Satori. From power chords to Eastern-tinged, North African, six-string freakouts, to crashing tom toms, to basses blasting into the red zone, Satori is a journey to the center of someplace that seems familiar but has never before been visited. It is a new sonic universe constructed from cast-off elements of the popular culture of the LSD generation. Forget everything you know about hard rock from the 1970s until you've put this one through your headphones. It's monolithic, expansive, flipped to wig city, and full of a beach blanket bong-out muscularity. In other words, this is a "real" classic and worth any price you happen to pay for it. - Review by Thom Jurek, AMG

At first, I must admit, that I don't have much informations about this awesome band. But let's see, what we have. I think, that FLOWER TRAVELLIN' BAND were one of the few eastern bands, which were more poular outside of Japan. Today bands like ETERNAL ELYSIUM have a lot of influences from them. The roots lay back in 1967 .Under the name FLOWERS they released in 1969 their first album, titled "Challenge". It was more in a Psychedelic vein, not so heavy and varied like the following records. In 1970, Joe(vo), Hideki Ishima(g), Joji Wada(ds) and Jhun Kowzuki(b), released on Atlantic the second album "Anywhere", now under the whole name FLOWER TRAVELLIN' BAND. You find some coverversions from songs like "House of the rising Sun","Black Sabbath" or "21st Century Schizoid Man on it and "Anywhere" is together with the following album "Satori" their heaviest. It saw the light of day in 1971 (Review below).
In 1972 they released the "Made in Japan" LP, again on the Japanese division of Atlantic . It's in the same vein as the forerunner album. Absolut heavy and filled with eastern influences.Together with "Satori", the band proved once again, that they were a strong unit. This was sadly the last album, but Atlantic released in 1973 the double record-set "Make Up". The album contains three live tracks, one of them is "Satori Part2". "Make Up" isn't so heavy as the forerunners, but still a good one. Aside of the music, the whole package was fantastic of "Make Up". The original album comes in a leather outer-bag and fold-out cover. I don?t know,when the band split-up and if the members still make music today,but FLOWER TRAVELLIN' BAND will have their place in the history of progressive Heavyrock. They played interesting music, a lot of good songs...sometimes very doomy...!
,"Satori" is the second album, after they had changed their name. It contains five long songs, titled "Satori Part I-V". The whole album had a very special atmosphere.It's not easy to describe, maybe mystical, dark and melancholic are some words I like to drop. In some songs,as in "Satori Part I", they play some kind of a proto epic Doom, brutal heavy riffs with nice tempo-changes. The clear and high voice of singer Joe completes this great song. But it's different to BLACK SABBATH. I think,you can hear, that FLOWER TRAVELLIN' BAND are strongly influenced through ancient Japanese/Eastern music. Like the second song "Satori II" ,an instrumental, which starts with a hypnotic psychedelic guitarsound and then turns into a instrumental part with Eastern percussion.But the song doesn't "freak-out" into a endless jam. The band played still very compact. "Satori III" is a very doomy instrumental. The song is like a crossover between Doom/Heavyrock and this typical ancient touch. It changes into a heavy groovy part which goes into something experimental and then back to the opening theme with an oriental-like ending. Really fantastic! "Satori IV"starts more progressive to change then into a groovy Blues part with a harmonica. Joe had a very unique vocal-style on "Satori Part V",maybe not everybodys flavour .The album closes with this song,that goes more in it the Heavy-Prog direction. At least, the production sounds very clear and powerful.Finally,I will give you the advice to discover the world of FLOWER TRAVELLIN' BAND, if you're into early 70's Heavyrock.The original is not easy to find, but there is a CD re-release on WEA, only released in Japan.Good luck! - Cosmiclava.de : : FLOWER TRAVELLIN' BAND

Flower Travellin' Band - Satori CD. All-time classic early 70s heavy progressive hard rock psych beast from Japan!
"Part 1" starts off with the vocalist`s howling wails and stomps it`s way in and out of godzilla`s coming to get you heavy riffs, killing guitar sound, more vocal wails and fades quickly at the end. Massive tune....rules.
"Part 2" is where the real eastern sounding sitar psychedelic feel enters and within the first few lines....
"There is no up or down.....the universe is the only master"
"The sun shines everyday....sun shines everyday"
...I realize that Joe is one of my favorite vocalists on the planet. (His post FTB solo albums don`t live up to this stuff...but some of them are still kool). So, you`ve got godly vocals and then wailing dual guitar/sitar on top of some kinda tribal drum beat. Sounds strange I bet....well, it ****in kills. Crank the piss out of this and you`ll really be blown away. This is the type of stoned spaced out floating otherworldly vibe bands like Kyuss and others only attempt to imitate but never duplicate. This is the real thing folks. This will never get old.
"Part 3" is where you fall deeper into the trance that is "Satori." A couple low death tolls and the song slowly emerges from the depths as the volume creeps up and the hypnotic spiraling guitar unfolds. The beat is slowed down from "Part 2" while the first few minutes feature the paralyzing fuzzy guitar work of Hideki Ishima. Absolutely kool! Midway the pace picks up and turns into a full on jam with layered guitars, dual leads...and still no vocals. The end mixes up slowed down parts, fast parts and a return to the "Satori" riff, as I like to call it.
"Part 4" picks up in the vein of "Part 1" and has some King Crimson feel in the weirdness of it. More great Joe vocals here and loads more kool guitar sound. In the middle a jamming harmonica section kicks in and soon it`s dueling guitars and harmonica with a hypnotic rhythm section behind it all. After a few mintues it reverts back to the riff from the beginning and winds down. Unusual and very kool tune.
"Part 5" opens furiously and heavily with drums, guitar, bass all working together. It sounds amazing...and remember this is 1971!! 30 years ago? That`s nuts! I was 3 years old and these guys were crushing! Anyway, it`s on to awesome Joe screaming where he sort of just yells and hollers over the music, which has slowed down to a march now. You`ll be hollering right along with him as it`s almost impossible to resist. Music is tapping into your soul right about now. It then glides into some beautiful mellow guitar soloing that just sings along just where Joe`s vocals left off. Where`s all the gutiar players like this now? I haven`t heard a guitar sing like this in ages. It reminds me of the way Michael Schenker can create a song within a song with his guitar solos. It`s very special. Then it switches back to more Joe yelling and bellowing and eventually picks up the pace back into the heavier and faster opening moments. Very Crimson-ish. A truly unique and massive record that doesn't compare to anything; a must have for all! - rockadrome.com