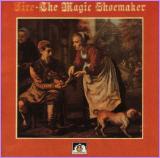 The origins of Fire can be traced back to their formation in 1966, in Hounslow, Middlesex, near the Heathrow Airport. The trio -- David Lambert (vocals/keyboards/guitar), Dick Dufall (bass/vocals), and Bob Voice (drums/vocals) -- originally were called Friday's Chyld, and released one single before changing their name. Based on the promise of their next batch of demos, they were offered a contract by Decca Records, in 1967. Their managers also negotiated a publishing deal with Mike Berry, head of Apple Records' publishing division. Fire's first single -- "Father's Name Was Dad" -- was produced by Decca staff producer Tony Clarke, but wasn't released until several months later, in March 1968, before being withdrawn a week later. Apple's Paul McCartney heard the track, however, and arranged for Fire to record it again, this time with Lambert doubling his guitar parts (they were also brought up an octave). Macca's improved mix was re-released, but it too failed to chart.

The band's next batch of demos were rejected, but the band was persuaded to record "'Round the Gum Tree," which had been written by Apple's Berry. This didn't sit well with Fire, and they refused to play on it, although Lambert eventually agreed to provide the A-side's lead vocal. The single was released, with minor results, in November 1968, and Fire was dropped by Decca. Pye Records eventually signed a licensing agreement with the band's management. In January 1970, the band began recording The Magic Shoemaker, a whimsical concept album about a shoe cobbler named Mark and his pair of magic shoes. This time, Fire was assisted by the Strawbs' frontman Dave Cousins on banjo, and guitarist Paul Brett (of Elmer Gantry's Velvet Opera). When it failed to perform, Fire disbanded.

Voice and Dufall joined Paul Brett's Sage in 1970, while Lambert did session work and recorded demos with the Strawbs' Rick Wakeman. He later provided soundtrack music for a Michael Caine movie, X, Y and Zee, before being recruited to join the King Earl Boogie Band (they had evolved from the chart-topping act Mungo Jerry). Shortly after the release of their Trouble at T'Mill album, Lambert accepted Cousins' invitation to join the Strawbs, who were moving in a more prog rock-glam direction. Lambert also guested on Cousins' solo album, Two Weeks Last Summer, and after the Strawbs broke up, recorded his own solo album, Framed, released in 1979. Today, Lambert works a ski instructor in Austria. Fire's "Father's Name With Dad" frequently appears on compilations of British psych-pop, including Nuggets II, and many others.

"This is a psychedelic rock opera, yeah this is definitely a concept album all the way by the pre Strawbs
Dave Lambert, but the music is more freaky that the Strawbs."