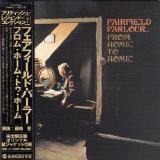 They come across as polite members of Victorian society, both in name and on the album sleeve, and earnest politeness is how I'd describe vocalist Peter Daltrey's delivery on Fairfield Parlour's "From Home To Home". I can almost imagine them turning up at the studio on penny-farthings before retiring to their gentleman's club.
More importantly, this is exquisite pop, thoroughly accessible without drifting innocuously in any mainstream category. Delicate acoustic and rhythmic textures are made robust by a clear, up-front production and more vivid by frequent bursts of electric instrumentation and harmony vocals.

Maybe it was too sophisticated to succeed commercially. Most successful singles artists look for a hit formula at some time, a gimmick or a mundane but easily remembered hook. The melodies here are great, but teenagers would probably have had more difficulty remembering a title and lyric like "Bordeaux Rose", included here as a bonus, than say, "Yellow River" or "Get It On". Fairfield Parlour, by contrast, sound too absorbed by their songs to be concerned with airplay. There are some lovely stories here and "Emily" positively soars. The sublime and the beautiful I Luv Wight was a confusing twist to the already confusing discography of the British psychedelic band Kaleidoscope. In 1970, just after Kaleidoscope changed their name to Fairfield Parlour, they recorded a single for Philips, "Let the World Wash In"/"Medieval Masquerade," under the pseudonym of I Luv Wight. A typical hippie-ish folk psych-pop Kaleidoscope/Fairfield Parlour composition, the A-side was intended as the theme song for the Isle of Wight festival that year.
Adding to its cumbersome details, although it was written by Peter Daltrey and Eddie Pumer of Fairfield Parlour, it was credited to the pseudonyms Newens and Baker. However, it was not used as the festival's theme after all.