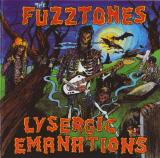 In 1984 Rudi recruited Vulcan Death Grip/Drive-Ins drummer Ira Elliot to replace Michael Philips, and what most fans regard as the classic Fuzztones line-up was born. Their first single, "Bad News Travels Fast," and subsequent mini-LP, "Leave Your Mind At Home" (recorded in 1983, on their ONLY U.S. tour), climbed the indie charts, as an entire "garage" scene formed around them.

The Fuzztones soon outgrew the scene and began headlining major NYC nightspots such as the Ritz, Peppermint Lounge, and Irving Plaza, where they backed the legendary Screamin' Jay Hawkins.

They recorded the classic "Lysergic Emanations" LP in 1984 (on an 8-track reel to reel, in a basement studio in Connecticut) which wasn't released until 1985 (on London's ABC records). A three month european tour soon followed, supporting the Damned in England, and headlining in Italy, Germany, France, and Holland. Notably, the Fuzztones were the first of the Garage "Revivalists" to introduce the genre to the european audience.

The impetus of their over-the-top live performances catapulted the new LP to the top of the indie charts. Highlights of the tour included a headlining slot at the original Marquee Club as well as gigs with the Damned at Hammersmith Palais, where Lords Of The New Church frontman, Stiv Bators, brought Lemmy (Motorhead)& Michael Monroe (Hanoi Rocks) backstage to meet the band.

The high point of the tour was a slot on a giant festival in Brittany, France, where the Fuzztones subbed for the Ramones on a bill that included Depeche Mode, Midnight Oil, and the Clash. Rudi approached opening act Leonard Cohen with a bottle of whisky and they polished it off together before Cohen's set. The festival was televised on french TV, and the press hailed the Fuzztones the "Revelation of the Festival."

Upon their return to the States, Ira and Elan quit to form the Headless Horsemen. "Lysergic Emanations" was reissued in the U.S. by Enigma, as the remaining 'Tones tried desperately to secure replacements and continue the momentum. Powerhouse drummer "Mad" Mike Czekaj was inducted, and one show was played (NYC's Irving Plaza) with Elan guesting. Deb quit soon after to form Das Furlines with Wendy Wyld. The remaining three Fuzztones auditioned potential candidates for one year before Rudi and Mike decided to move to L.A. to reform the band.