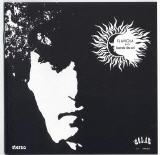 "Another great example of Brasilian 'psicodelia' from the collective of underground musicians in Recife, featuring Flávio Lira in the lead role, along with Lula Côrtes, Pablo Raphael, Robertinho of Recife, and Zé of the Flute. Of the crazy albums from this period, the Flaviola record Flaviola E O Banda Do Sol (Flaviola and the Flock of the Sun) is one of the rarest jewels. Although it was recorded the same year (1974) as Lula Côrtes and Zé Ramalho's Paêbiru album, and with most of the same musicians, this is mainly an acoustic album, rife with poetic language and regional instruments, but also demonstrating the abundant energy of people involved in making something fresh and new. The cauldron of influence in Recife resulted in some very intriguing music, and the Flaviola album is no exception -- it's more intimate a trip than Paêbirú, and more accessible an experience than Satwa; this is a brilliant album, full of strange moments (cellophane crinkled into the microphone as percussion), some deft acoustic guitar, and some of the prettiest songs this side of Vashti Bunyan. Notes are more or less in English, and hefty booklet includes lyrics too." ~ Forced Exposure

"What would happen if Robin Williamson, Mike Heron or Vashti Bunyan had been born in Recife, Brazil? … How they would sound? Probably, we will never know, but for me the closest answer lies in 1974’s album “Flaviola e o Bando do Sol” (Flaviola and the Flock of the Sun).

Williamson, Heron or Bunyan weren’t in Brazil at that time, but Flávio Lira, Lula Côrtes, Pablo Raphael, Robertinho of Recife, and Zé Ramalho certainly were (FLABBER NOTE: Zé Ramalho does not play on this!), and they could have been perfectly the "Incredible String Band Brazilian counterparts”, their self tiled lp sounds astonishingly fresh, full of native acoustic Brazilian instruments, gloomy at times [canto funebre], hysterical [asas (pra que te quero)] or extremely poetical [noite].

If you like the folkier side of other Brazilian kids Called Os Mutantes (I know that you like them) you certainly will love Flaviola, as Forced Exposure points: “this is a brilliant album, full of strange moments (cellophane crinkled into the microphone as percussion), some deft acoustic guitar, and some of the prettiest songs this side of Vashti Bunyan”

This mystical album alongside Zé Ramalho & Lula Côrtes “Paêbirú” (recorded the same year and almost with the same lineup as Flaviola…) and Satwa’s “Satwa” constitute the three jewels of Recife’s acid folk crown.

What are you waiting?, put your headphones, turn on the music, and smell the perfumed night of Recife. This could be the cheapest and exciting Holidays ever!"