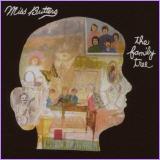 Digitally remastered reissue of this album from the Canadian band led by Bob Segarini. Originally released in 1968, this was Segarini's first album, predating his work with Roxy, The Wackers and his excellent solo career. Beautifully re-mastered from the original mono master tapes (the stereo mix was done by an assistant engineer alone and is a travesty according to the band members!). Amazing packaging including previously unpublished photos and in-depth liner notes with the participation of Segarini. Rev-Ola.