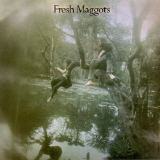 This duo came from Nuneaton in Warwickshire, with their own individual brand of folk-rock. The album is full of good songs like the exquisite Rosemary Hill and Dole Song, yep a song about signing on, which features some arresting guitar work. Other highlights include Everyone's Gone To War, a song of different moods with some good fuzz guitar work; Who's To Die, a lovely melodic song with a riff which sounded like early Electric Light Orchestra and the majestic finale Frustration. There are no weak links, though, on this consistent album which is thoroughly recommended. Long established as a cult classic and collector's grail, Mick Burgoyne and Leigh Dolphin's sole album is presented here with their full co-operation. Originally recorded in 1971 when they were just nineteen and fresh to the studio, Fresh Maggots is one of the best distillations of folk and psychedelia ever recorded. Varying in tone form heavy rock 'Frustration', to protest 'Everyone's Gone To War', social commentary 'Dole Song' and pastoral 'Rosemary Hill', it's a highly unusual and powerful record that enjoyed extravagant acclaim on release but sold poorly and has never been officially issued since.