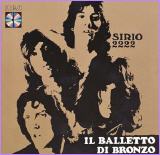 On their first album, Sirio 2222, Il Balletto di Bronzo were obviously influenced by English and American bands such as Jimi Hendrix, Beatles, Led Zeppelin and The Yardbirds. "Un posto" and "Girotondo" are nice Hendrixy rock tracks centered around a simple, but effective guitar riff. "Eh eh ah ah" starts like a nice mellow ballad, but gets into a Canned Heat type blues rock groove about halfway. A surprising track is "Meditazione" featuring orchestral arrangements; it is a more typical symphonic progressive track with elements of The Moody Blues, The Beatles and possibly Barclay James Harvest. Most tracks are short (between 2 and 4 minutes), except for the 7 minute "Incantesimo" which sounds not unlike Humble Pie and "Missione Sirio 2222," lasting almost ten minutes. "Missione Sirio 2222" contains droning psychedelic rock with whirling guitars and a heavy pounding drum sound, sandwiched between an acoustic intro and outro. Evidently incomparable to their masterpiece Ys, Sirio 2222 is nevertheless a good rock album with a clever mix of ballads and fairly heavy rock tracks. An Italian group with a similar sound would be Osage Tribe. Anyone looking for a proto-version of the Ys album will probably be disappointed by this album.

This predecessor to Il Balletto di Bronzo's YS has very little if anything to do with the sound the group would subsequently develop. It's probably even inaccurate to apply the same band name to both releases. Indeed, half of the band would depart after this effort, paving the way for the definitive flair of Gianni Leone's personal mark on the group's later incarnation. A well known phenomenon by now, Sirio 2222 has disappointed many a prog fan expecting an embryonic version of YS. With this in mind, sheer curiosity eventually won out, and not expecting much musically, I thought the album would make at least an interesting historical document if nothing else.

In the end, Sirio 2222 was kinda what I expected, maybe even a little better than I expected, but certainly not an essential album. The sound here is dominated by fuzzed-out guitar, with primary influences seeming to be Jimi Hendrix, Cream and the like. The songs are for the most part straightforward hard rock tunes, with an occasionally pretty, Mediterranean-ish melodic sense coming through, such as on "Mission Sirio 2222", which also contains some of the album's most intense, guitar shredding moments, and the compact, tuneful "Ti Risveglierai con Me", my favorite track here. Nothing spectacular here, although YS devotees with a coincidental affinity for hard rock/psych will likely find something to enjoy.

"Il Balletto di Bronzo were born in Napoli in the late '60s and their debut album Sirio 2222 is considered one of the top Italian albums of all time. Not only this, it's also regarded internationally as one of the finest examples of hard-psychedelia ever to be recorded. It certainly has a progressive feel too, but being recorded in 1970, the prog sound was not still strongly installed, so this has only a flavor. An absolute killer of an album, Italian-sung hard-psychedelia at its best, and original copies of this album go for $1000.

4 stars The 1st album by Balletto had a different line-up from the one on the superb Ys. But Sirio 2222 is surely worth a listen and is a crucial work for the italian scene. What you can listen here is hard rock with a psichedelic flavour and reminescences of the '60 beat. But the classical influence on the track "Meditazione" represents the turning point towards the progressive world. The fans of Balletto won't regret giving a try to it.

2 stars Hard different and inferior to the inmortal "Ys", but interesanting: most of all the nine- minutes psychedeleic "Missione Sirio 2222", the one and only track really at the level of the next album. Only for the lovers of Balletto. "Ys" doesn’t resits comparation. "Ys" is one of better LP ever recorded. "Sirio 2222" is a minor album.

3 stars This release makes me feel definitevely happy! however inferior to "YS", it combines hard rock and prog with the well-known lyrics by that genius of Leone. it's a pink floyd-like work, in which all musical tastes are satisfied, even the most progressive-driven audience, thanks to the presence of the monstrous title track suite. The problem arises in evaluating the sound...it's blatant that we just came out of the '60 in which the tape was the only way to record and the result is quite rough. Will this potential masterpiece yield a good remastering session(as "YS" did with "Trys")? if yes, I'll be ready to raise my rating by one point to the current 3,5.
____________________________________________________________

Their first album Sirio 2222, a rather average album of Hendrix-esque psychedelic rock may be of no interest to progressive fans yet their second, the widely regarded as superb Ys is a no miss. If you like jams that climax in incredible splendor and keyboards that compare to some of Wakeman or Stewart's best works, I think you may like this one. Although incredibly haunting, if you like dark works don't miss this one. I offer these quotes in support: Audion (speaking of the Italian band, Semiramis) .".. in the genre only one album I can think of surpasses it - Il Balletto di Bronzo's Ys," Syn-Phonic of Ys: "may be the very best ever and who's to argue " and Wayside (speaking of Sirio 2222) ."..who would next record the classic Ys." If these leading lights of prog music ever influence your music buying tastes, than you can probably see where I'm coming from....