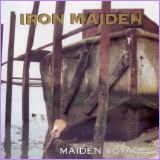 In 1964, Barry Skeels, Steve Drewett, Chris Rose and Alan Hooker formed an acoustic band in Basildon, Essex that eventually evolved into a band called Iron Maiden (unrelated to the currently famous Iron Maiden). By 1966, the lineup was Skeels (bass), Drewett (vocals/harmonies), Rose (lead guitar), Tom Loates (rhythm guitar) and Stan Gillem (drums); they played Rolling Stones and blues numbers under the name "Growth". Reduced to a two-piece, Drewett and Skeels played blues under the name of "Stevenson's Blues Department" in pubs and clubs in Essex and London. They supported a number of up and coming bands including Jethro Tull, Fleetwood Mac, The Groundhogs and King Crimson.

In 1968, Drewett and Skeels were joined by Paul Reynolds (drums) and Trevor Thoms (guitar). They released an acetate (God of Darkness/Ballad of Martha Kent) under the then risqué name of BUM. When they signed to the Gemini label in 1970, the name was changed to the less risqué Iron Maiden. They recorded their debut album Maiden Voyage. Reynolds was replaced by Steve Chapman on drums and Iron Maiden released the single Ned Kelly/Falling. This coincided with Mick Jagger's film "Ned Kelly". A planned Australian tour fell through. The Gemini record label also folded (with the loss of the debut album master tapes) and Skeels left Iron Maiden. The band carried on without him for a while, but the debut album was not released until 1998 using duplicate tapes owned by Skeels. This "original" Iron Maiden is often considered by fans as one of the earliest 'true' doom metal bands.