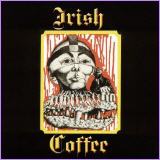 *** From the Dutch speaking part of Belgium. Probably the best progressive album of the land, a classic. After many bootleg releases now a legitimate edition with great 32-page booklet.

Irish Coffee are from Aalst in Flanders, the Dutch speaking northern part of Belgium. They are regarded - and quite right so - as the best progressive band of their country. Already in 1971 the band released their one and only LP. It was copied and counterfeited on various LP and CD editions, almost all of them illegal and often in a poor quality. Here, at last, comes its legal edition on CD with all the former insufficiencies of sound erased, and thus in a fine quality of sound. As bonus you will find all tracks from their 7" singles. The booklet gives you not only a detailed insight of the band's history, but also a full discography and a lot of photographs of the band, the various covers, and labels. Their music - two guitars, organ, bass, drums, and songs in English - is classified as progressive hard rock, yet, it doesn't sound that hard at all. ( Garden of Delights )

Officially started in 1970, originating from another band called "The VooDoo". In the beginning they played only covers from British & American bands, such as Deep Purple, Led Zeppelin, The Who , The Kinks etc...

For more than a year they rehearsed and played in a club near Aalst, Belgium, called "El Gringo". That's where they put their act together, and were they were loved by so many.

Also Louis de Vries (manager of The Pebbles and Middle o/t Road), who one day visited the place, was immediately convinced that this was a unique band. He contracted the boys and asked them to write a new song. So they wrote "Masterpiece" & "The Show", they changed their name, and "Irish Coffee " was born. He presented the single at MIDEM (a music fair in Cannes) and there was a lot of interest, also from American side. They wanted to release the band in America but then they would have to make an album.

The boys worked hard and after a few weeks they had enough songs to record. They went to Antwerp to a small 8-Track studio and put their work on tape in 4 days.

"Masterpiece" became a small hit in some European countries, as did the album, but unfortunately in America they never released any of them. Nowadays it has become become one of the most collected albums of the 70s, around the world. Not only the album, but even songs like "A day like today" or "The beginning or the end" are most surprisingly very wanted collectors' items.

Irish Coffee did a lot of live-gigs those days and were a support-act for bands like : Focus, Dr.Feelgood, Yes, ChrisFarlowe and many others. They made also some appearences on TV shows in Belgium and France with Jacques Dutronc & Golden Earring.

Someone wrote : "This was one of the best hard rock groups to ever come out of Belgium".

Unfortunately, due to several reasons, the band split-up in 1975. ( Irishcoffee-band.be )