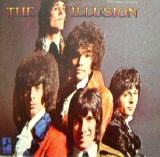 An Italian - U.S. band, based in Long Island, New York, who played heavy rock with some psychedelic influence. The band were formed as The Five Illusions by the lead singer John Vinci as a senior in high school in 1964 (thanks John Vinci for leaving a comment). They enjoyed some minor chart success, and their albums were produced by the famous Jeff Barry. Good album and some cool guitar work.

By some standards, the Illusion were one of the most successful unknown psychedelic bands of their generation — unknown, yes, but with three LPs to their credit on the Steed label. Their personnel included Michael Ricciardella (drums), Richie Cerniglia (guitar), Chuck Alder (bass), Mike Maniscalco (guitar, keyboards), and John Vinci (vocals). The Steed label released Illusion, Together, and If It's So between 1969 and 1970. Illusion was interesting enough to observers to merit a release in England in 1969. By 1971, the Illusion's albums were being sought by kids who'd never heard the band play. One of their songs, "I Love You," has made it on to compact disc.

This Long Island quintet tried to simultaneously fly their freak flag and sweet-talk the teenyboppers, and the results were lopsided but strong enough to shine years later. The Illusion scored a Top 40 hit in 1969 with a truncated version of the opening track from this debut LP, "Did You See Her Eyes." It's a tough, swaggering number with a simple theme (skirt watching) and a basic structure, but the album cut is expanded with an obtrusive drum solo, assorted echo/wah-wah effects, and an uncredited cop from Sly & the Family Stone's "Sing a Simple Song." Such unnecessary tampering proves that the Illusion were hip to the new directions that rock was taking at the time and had grander plans for their music than mere hit singles. Regardless, these guys sound best when they get straight to the blue-eyed soul without any prog rock side trips. "Talkin' Sweet Talkin' Soul" should have been the hit, a rambunctious power pop number that bounces around the ears with an irresistible wordless vocal hook. The medley of "Run, Run Run" and "Willy Gee (Miss Holy Lady)" combines both tendencies, pairing the aggressive hard rock of the former ("I'm gonna get shot/This girl is hot!") with the bubblegummy singsong of the latter ("One, two, three/Push out Willy Gee/Four, five, six/Beat him with a stick"). Most of the remaining track time strives for a slightly more psychedelic soul sound, at times reminiscent of the Rationals or a bluesier Byrds. Of these songs, "I Love You, Yes I Do" and "Charlena" stand out, but all the material on this now-rare LP has serious spirit and period charm.