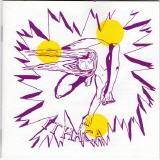 A very rare privately-pressed demo-only album which is heavily influenced by the early seventies Moody Blues sound. In other words, we're talking progressive pop/rock with quasi-mystical lyrics. Some will love it, others will feel it typifies all that's bad in the genre. Among the better moments are Dreams and Times.

The individuals responsible for this had earlier been involved in Agincourt, Alice Through The Looking Glass and Tomorrow Come Some Day.

The Ithaca album is a mega-rarity, but some further copies appeared on the market when the band were tracked down. According to 'Record Collector' the earlier market value (£1,500) was halved to £750.