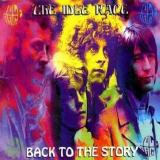 2007 reissue of this superb two CD set from the often overlooked British '60s band featuring future Move member and E.L.O. leader Jeff Lynne. Back To The Story features all three Idle Race albums (1968's Birthday Party, The Idle Race from '69 and the Lynne-less Time Is from '71) , singles and b-sides, plus three un-issued alternate versions and two tracks from Jeff Lynne's 1966 recording stint with the Nightriders. 47 tracks total.

In the history of 1960s British rock, Birmingham was a source of talent virtually in the same league with Liverpool. Although the city never produced a group as big as the Beatles, it was a seething cauldron of musical activity and home to literally hundreds of groups whose activities and memberships were in a constant state of ferment, yielding acts such as the Move, the Moody Blues, and the Electric Light Orchestra, whose influences extended well into the 1970s and beyond. Perhaps the most important of the Birmingham groups that didn't make it to the front rank was the Idle Race.

The group occupies a strange focal point in the history of the city's music and, between 1960s and 1970s rock, as a link between Mike Sheridan & the Nightriders, the Move, the Electric Light Orchestra, and the Steve Gibbons Band. The Idle Race itself evolved out of one of the most promising of local early-'60s Birmingham bands, Mike Sheridan & the Nightriders, who recorded for EMI and later for Polydor and whose membership included a young Roy Wood. After the latter's exit to join the Move in 1965 and Sheridan's decision to stop performing regularly with the group, the other members -- Dave Pritchard, Greg Masters, and Roger Spencer -- tried renaming themselves the Nightriders for a time, initially with guitarist Johnny Mann (formerly of Carl Wayne & the Vikings, whose frontman also passed into the Move). Mann quit after just a few weeks and was succeeded by Jeff Lynne. The reformed Nightriders had Lynne on lead guitar and backing vocals, Roger Spencer on drums, Greg Masters on bass, and Dave Pritchard on rhythm guitar and lead vocals. By the end of 1966, however, they'd begun evolving a new, more ornate sound, vaguely similar to some of the experimental tracks that the Beatles were putting on their albums, only more playful and straightforward; additionally, Lynne had become the dominant musical personality in the band. In later years, it would be called freakbeat -- the British equivalent of psychedelic punk (or, more correctly, garage punk) music in America -- and seem like a coherent body of music, yielding thousands of cheerfully trippy pop/rock singles, but in 1966, no one was exactly sure what the appeal of this music was.

A name change seemed in order to go with their new sound, and the result, after flirting with the more poetic "Idyll Race," was the Idle Race. The change of name didn't help them sell records, however, and an early contract with Polydor, dating from their days as the Nightriders, was soon terminated. Luckily, their one-time bandmate once removed Roy Wood helped get engineers Eddie Offord (who went on to record Yes) and Gerald Chevin interested in the Idle Race, and they agreed to record the Idle Race. The eventual result was a contract with the British arm of Liberty Records, which was starting to record a fair number of promising U.K. artists, including Tony McPhee and the Groundhogs. An initial attempt at a debut single for the label, with a cover of Wood's "Here We Go Round the Lemon Tree," was aborted when the Move's version turned up as a B-side of one of their hit singles and began getting played. Lynne suddenly moved into still greater prominence, when two of his songs ended up on both sides of the single that was released, "Imposters of Life's Magazine" b/w "Sitting in My Tree." The group was rewarded with a lot of press coverage but relatively small sales. Three more singles followed over the next year, all featuring the cheerful psychedelic sound that was the group's strong point.

In October of 1968, the group released its debut album, The Birthday Party, which contained all six of their single tracks from the preceding year. That long-player was too ambitious to achieve mass success. A strange mix of cheerful psychedelic pop/rock juxtaposed with the ambience of the English music hall and a vaguely suggested dark side, The Birthday Party was a far cry from the most easily absorbed psychedelia, and it was a commercial failure. It did earn the group critical respect, however, not only from top disc jockeys but also established music superstars -- including the Beatles -- and up-and-coming artists (Marc Bolan among them) also declared their enthusiasm for the Idle Race. Jeff Lynne was offered the chance to replace Trevor Burton in the Move, but he refused, preferring to remain with the Idle Race, where he took on a still greater role in the shaping of the group's sound, co-producing their next few singles. The band faced 1969 with a great reputation in the press and a steady array of good gigs, but no serious chart success to speak of. Their hope was that a second, more accessible LP might succeed. The resulting album, produced by Lynne late in the winter of 1969, was The Idle Race. The group's second album was almost a mainstream psychedelic pop record compared to its predecessor, but it still failed to capture the public's interest. In the wake of The Idle Race album's failure and their continued struggle for success, Lynne finally jumped ship at the start of 1970 in favor of joining the Move.

Partly as a result of their common origins and shared group genealogy, the two bands are often compared to each other and their sounds are thought of as similar, but the Move had enjoyed relatively easy success and, indeed, sold hundreds of thousands of records in England (even enjoying a number one hit at the time of their first effort to lure Lynne, late in 1968) and rated a review in Rolling Stone, where the Idle Race weren't on anyone's radar screen in America.

Additionally, the Move were a very diverse band, equally adept at giving their own interpretations of American soul or folk-rock as psychedelia, though by the time Lynne joined, he and Wood were on the same page, looking for a bigger and unique sound. Under Wood's and Lynne's leadership, the band eventually transformed itself into the Electric Light Orchestra. The Idle Race continued, reduced to the original ex-Nightriders core of Pritchard, Masters, and Spencer, with guitarist/singer Mike Hopkins and singer/harmonica player Richie Walker. This version of the group had little in common with its earlier incarnation -- they enjoyed belated international success with covers of Mungo Jerry's hit "In the Summertime" and Hotlegs' "Neanderthal Man," but these were a far cry from Lynne's original songs, and the group seemed to lack a central focus to its work. Pritchard exited, followed by Walker, Spencer, and Hopkins, while Greg Masters kept the group going for a time with a new lineup that included guitarist/singer Steve Gibbons, before he finally left in 1972. One of his successors was none other than Move alumnus Trevor Burton -- by that time, however, the name "the Idle Race" seemed irrelevant as well as outdated, and he acknowledged this reality by becoming the Steve Gibbons Band.

Most people, in speaking of the Idle Race, are referring to the group as it existed during the years 1966-1969 with Lynne in the lineup. That group's output got a new lease on life during the mid-'70s in the wake of the success of the Electric Light Orchestra. In 1974, Canada's Daffodil Records compiled the major part of the group's 1960s output onto a two-LP set called Imposters of Life's Magazine, which was a choice import for years and highly prized -- as were original Idle Race albums -- by fans of Lynne's '70s work. Finally, in 1996, Premier Records released Back to a Story, a two-CD set of the complete official recordings of the Idle Race in its various configurations and lineups.