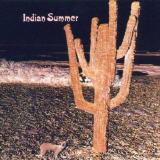 Indian Summer biography
These four musicians came out of Coventry and made one sole album released on the rare Neon Records (other releases of interest to progheads on that label would be SPRING, TONTON MACOUTE) that did not manage to promote their artists correctly, although INDIAN SUMMER had the same management than BLACK SABBATH. Their album consists of fairly long numbers much KB-driven hard rock with lots of instrumental interplay: a typical release of the times. Although, they could be placed among the lines of Mk2 PURPLE or URIAH HEEP, they manage to have a sound of their own. This is a basic quartet (Harker on bass, Hooper on drums, Bob Jackson on KB & vocals and Colin Williams on guitar), but they have enough tricks up their sleeves to keep you interested and enthused through the whole album.

IINDIAN SUMMER is highly recommended to progheads who are in love with the early 70's and wishing to delve deeper than the classic and find smaller gems such as this one. This should also please other progheads, even the neo-progheads, to which unlike the banner given by our beloved site IS NOT a neo-prog band.

Review by Proghead
INDIAN SUMMER was a little known one-shot British prog rock band that released this self-entitled album and disappeared. The album was originally released on RCA's Neon subdivision, the same label that brought us acts like SPRING, Mike WESTBROOK, RAW MATERIAL, The RUNNING MAN, and TOUTON MACOUTE. INDIAN SUMMER's music is typical early '70s prog rock dominated by Hammond organ with some Mellotron. The opening song, "God is the Dog" is obviously the band's protest against religion, and despite that, it's actually one of the better songs on the album. But the album also has its flaws: the album gets bogged down by several pointless solos that go nowhere, specifically on the final cut, "Another Tree Will Grow". The band needed to either cut off the excess fat, or made the solos more interesting for me to regard it as a classic.
Other interesting things of note: the cover artwork is by Keef, same guy responsible for Rod Stewart's Gasoline Alley, BLACK SABBATH's debut album, COLOSSEUM's "Valentyne Suite", CRESSIDA's "Asylum", MANFRED MANN's "Chapter III's Vol. 2", and many others. Also INDIAN SUMMER's debut was one of only two Neon titles released in America (the other being "Centipede's Septober Energy", but it didn't surface in America until 1974, three years after its original UK release, and by which point, Neon ceased to exist, so it was released in the US on the standard RCA/Victor label). The American version of the Indian Summer label was also Neon (uses the same label), but I suggest you avoid buying the American LP because by that time, RCA in America was printing their albums on the crap Dynaflex (that was their silly company trademark of ridiculously flimsy vinyl - supposedly to help stop warping - at the expense of sound quality, which of course, RCA failed to mentioned, and started ripping people off in the process), which means crappy sound quality, so go for either the British LP, or the CD reissue on Repertoire.

Anyway, because of the excess baggage on some of the cuts, this album fulls short of a classic for me, but it's still not bad, especially if you like early British prog. ~ Progarchives