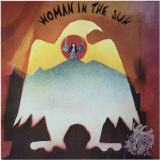 Sad-tinged folk from Leonda -- an artist who appears to have some Native American affiliations, at least from the themes of the songs -- and who's working here with backings that are well-done, but never too professionally polished! The Paupers help out with a good deal of the instrumentation -- and backings are usually gentle, but with some slightly complicated phrasings in ways that almost remind us a bit of Tim Hardin at times, but which come off quite differently given Leonda's slightly bluesy vocal approach. Titles include "Zono My Bird", "Peace & Pipes", "Make It All Right", "Mother In Love", "Blue Diamond In Platinum Setting", "Mist In The Sky", and "Somebody's Gonna Ask Me Who I Was".

Buffy Saint-Marie is not the only folk singer-songwriter with native origins ; I also very much liked the soulful Essra Mohawk, sadly still not reissued. Also this is singer-songwriter related but with a somewhat bluesier and still soulful vibe. For many songs she keeps this bluesy style alive, with a mostly rather gently soft-rock moodily vibe. But there also a few more folkier, or calmer blues-of-heart personal songs, like “When I lived in my Grandmother’s house”, with a more sad bluesy folk flavour, with a gifted voice for showing emotions in the song, or “come take a waltz through my heart”. A musically more unique and distinctive track is “Peace and Pipes” a song with several musical references to native Indians, in the singing improvisations, with an open tuned guitar that adds more psychedelic parts, and a drum arrangement that clearly refers to a powwow drumming. Also “Zozo my bird” (see illustration) continues just slightly this reference..before definitely returning to more direct bluesy folk associations.

One of the backing band members was Brad Cambell (The Paupers –besides a few other members of that band-, Janis Joplin)