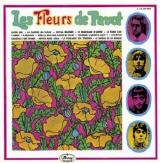 "Originally released in 1968, the now impossible to find self titled album by Les Fleurs De Pavot is considered as the first psychedelic/hippie record from France. A veil of mystery surrounded the real origins of the band at the time... according to their press release, they were formed by a couple of hippies, Groovy Pat from London and Jesus from San Francisco who met at some Soft Machine shows in Paris... the reality was more unglamorous: Les Fleurs De Pavot were in fact a twist band called Bourgeois De Calais, transformed into exploitation acid-eater hippies by their manager JP Rawson. The album was produced by the genius tandem of Jean Claude Vannier (famous for his involvement on Gainsbourg's Melody Nelson album) & Bernard Estardy (Nino Ferrer's organist / sound engineer). An explosive mix of psychedelic pop, yeyé music & bizarre studio experimentation featuring 12 superb tracks full of fuzz guitars, groovy vocals and swirling organ with very explicit drug related lyrics. Music ranges from mod psych dancefloor smashers like 'A Degager' to the final six minute lysergic freak-out 'Le Rateau De La Meduse' and even one cool bossa track."

This is considered to be one of the finest French psych records out there, and rightly so. Les Fleurs de Pavot were far from being actual hippies, however--their image was created by their Svengali, Jean-Pierre Rawson, in an exploitative effort that was rather typical of the era. The band had issued several EP's as the serviceable beat quintet Les Bourgeois de Calais before Rawson decided that transforming them into hippie freaks (one of them was supposedly named Jesus and from San Francisco) was the way to go. The album was produced by the unbelievable dream team of Jean-Claude Vannier and Bernard Estardy, and it shows...the arrangements are brilliant, the lyrics reference drugs as often as possible, and the atmosphere is highly lysergic. This album doesn't need drugs to be enjoyed--nay, this album IS drugs