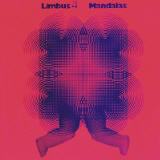 Formed in Heidelberg in 1968, Limbus were a most unusual band who grew a unique music out of jazz, folk and avant-garde roots.

As "Limbus 3" on their debut album NEW-ATLANTIS (subtitled "Cosmic Music Experience") they had become a multi-instrumental acoustic trio, and had broken out way beyond free-jazz, and fused chaos and delirium into a weird ethnic music concoction, with overtly uncompromising results, sounding like some strange Balkan hippy band.

As "Limbus 4" they had, naturally, expanded to quartet, and had also taken on board electric instruments. Although the instrument isn't credited, MANDALAS opens with what sounds like bizarre wailing kazoos, all frenzied and out of tune. After that it all gets a lot more cosmic, with swirling organ, studio effects and a wealth of instrumental textures. MANDALAS is the Ohr album that has perplexed and confused many.

Limbus were certainly one of a kind. They played at jazz and folk festivals on and off for a number of years, and still get together for occasional reformations nowadays. A document of Limbus 4 live is featured on the BORN FREE festival album. (From The Crack In The Cosmic Egg)