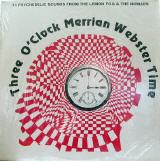 Two of the finest band to emerge from the Houston Psychedelic scene were The Lemon Fog and The Nomads. Both groups were signed by Orbit Records, wich had other noteworthy bands of the time such as The Cicadelics, The Laughing King, The Rebeliers and The Sterling Castle.

The Lemon Fog were pioneers of a sound that merged punk and psychedelia into a newly integrated minfblowing potpourri of music. The lyrics refelected youth's alienation and search for something other than the American dream. A search beyond the normal dimensions of logic and time into the realm of the unknown.

The Lemon Fog will astound listeners with a fresh and marvelous sound of a bygone era when it was cool to take chances and experiment with the newly emerging psychedelic underground music. Although the group broke up in 1969 their music on this album will certainly keep them in mind for many years to come. They appeared in 1967 on Larry Kane's TV show doing "Echoes of time" and ·The Living Eye Theme".

The Nomads were a bizarre psychedelic outfit that specialized in strange LSD laced lyrics. Starting out as a Byrds-Love-Folk Rock outfit they evolved intoa unique sounding group. The selection on this album reflect this transition. Theis las recorded effort was in Dec. 1968, when they generated into an outfit known as The Smoke, basically a hard rocking blues band. The group members would be listed but unfornunately such information was lost.