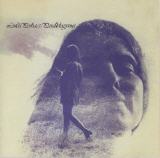 PARALLELOGRAMS is the unquestioned queen of the hill of female psychedelic albums. Fans of the genre are as unanimous in their praise of this album as mainstream critics are for Joni Mitchell’s BLUE, almost to the point where it’s unthinkable that anything else can be better. The Mitchell comparison is an important one here, whether it accurately describes the music or not. Every American female folk-influenced singer/songwriter is immediately compared to Mitchell (and British singer/songwriters to Sandy Denny), and, invariably dismissed as an inferior copy. Perhacs’ one and only album suffered this very fate. If critics wouldn’t take anyone but Joni seriously, why would they bother with this “hippie variation of her style?” It’s a curious form of self-conscious sexism on the part of 70s rock critics (some of which were female) that as long as they gave good reviews to Joni Mitchell, and occasionally Carole King or the rare oddball like Dory Previn or Essra Mohawk, they could ignore and dismiss every other woman in the business. Even thirty years later, we have John Mellencamp on TV saying (I’m paraphrasing) “I’m sorry to have to say this but when it comes to women in rock, there’s only one, Joni.” (This comes from an overrated buffoon whose own backup violinist, Lisa Germano, has released four or five albums that blow away anything his sorry ass ever did).

Even in the collectors’ world, what could have been a quality attempt to explore the role of female artists in psychedelia, the HIPPIE GODDESSES compilation, was sunk when its creators decided to play up the “sexy hippie” angle. The compilation had a topless photo on the cover, and put The Happy Hooker and other stupid pornography side by side with tremendous music by serious artists like Sally Eaton, Margo Guryan and Perhacs herself. It didn’t even list the last names of the artists it included, which is just as well because their work was so cheapened by the context. Obviously, it’s against all odds that the reputation of PARALLELOGRAMS has grown as far as it has, yet it’s to the point where the album easily sells for around $200 (despite not being anywhere near as rare as the hype would make you believe) and it has now been released on CD twice. As annoying as the Mitchell comparisons are, they’re probably what drew Perhacs to the attention of people outside of the world of psychedelic record collectors. It’s hard to imagine fans of, say, Tori Amos or Jewel, having C.A. Quintet CD on their shelves, but many of them have been able to make the leap from BLUE to PARALLELOGRAMS.

So what is it that makes PARALLELOGRAMS stand so far ahead of the pack? It’s very simple. There is essentially no other album by a woman where a personal vision is fully realized (without production interference, cover versions, inappropriate arrangements, etc), and that vision includes not only tremendous songs but a distinct psychedelic flavor. There’s a lot of debate about how to define “psychedelic” music, but by any definition there’s no doubt that this is it. It’s there in the free-form freakout of the title track, the “I’m spacing out/I’m seeing silences between leaves” lyrics to “Chimacum Rain,” the “colors dripping” lyrics to “Morning Colors,” and the sound effects behind “Moons And Cattails.” Though the music is wholly different, these songs create the same vibe as the highlights of the first Country Joe & The Fish album. There are some killer psychedelic tracks by other women, but nowhere else is there such a consistent and organic whole over an entire album. For example, Grace Slick’s songs on AFTER BATHING WITH BAXTER and CROWN OF CREATION are extraordinary, but she isn’t the Airplane’s only songwriter; the Jan & Lorraine album clearly shows strong influence from the men who produced and played on it; Sally Eaton’s album has one absolute knockout trip of a song amongst a mixed bag; Carolyn Hester’s two “psych” albums, despite some great songs, feel like her heart isn’t 100% into the style, Risa Potters sings lyrics like “God must have been stoned when he made me” but her album, musically, is simply soft rock; Gayle Caldwell mixed one killer psychedelic song into what is otherwise just a piano based singer/songwriter album, and so on.

It’s possible to name hundreds of women who embraced and/or experimented in the same way as male musicians, and certainly a whole batch of better-conceived HIPPIE GODDESSES-type albums could be created. Nonetheless, I’ve dug up every single album of the type I could find, and the fact is that over a full 40 minutes, none of them come close to PARALLELOGRAMS. (The only compelling case that can be made is for the album by These Trails, a band with a female leader and an even more distinctive sound than Perhacs. This album’s 1973 release date and its Hawaiian exotic feel put it in a different “category,” but it’s certainly arguable that in its own way it’s an equally challenging and successful work. It does, however, include the work of some male co-songwriters.) This isn’t to say that PARALLELOGRAMS couldn’t have been matched. If anything, we have to marvel at the kind of creative control Perhacs was given over her own album, when so many hundreds or records by female artists had their artistic vision twisted and softened by the men who produced, managed, arranged, and played the instruments. It’s probable that somewhere out there an equally good album was waiting to be made. We’ll never know.

PARALLELOGRAMS starts off subtly with “Chimacum Rain.” It introduces us to Linda’s rich, expressive voice, here supplemented only by an acoustic guitar, brief electronic sound effects and multi-tracked harmonies sung by Linda herself. Her singing style tends to be awfully serious; while she doesn’t exactly seem pretentious, it’s fair to criticize the album for being humorless. On a song with harmonies as gorgeous as these, one is unlikely to notice. On a lesser song, though, like the closing “Delicious,” a more effortless form of singing would have been welcome. Her tone and style are perfectly suited to the album’s two near-“rock” songs, “Paper Mountain Man” and “Porcelain Baked Cast Iron Wedding,” both of which sound positively sinister. They sport enigmatic lyrics; it seems that she’s as fascinated by the man’s brute sexuality in the former as she is disgusted by the bored rich promiscuity in the latter. In both cases she’s showing a wisdom that undoubtedly went over the head of the few who heard the album at the time. Both songs are low-key but sharp blues rock, more intelligent and ultimately more powerful than the kind of heavy bluesy stuff that was all over the charts at the time. The rest of the songs are softer, and arranged in a simpler way. Perhacs’ melodies aren’t particularly ambitious, but she hits the right high notes when she needs to, and songs like “Sandy Toes” and “Hey, Who Really Cares” really sneak up on the listener.

Though a variety of instruments are used on these songs, the arrangements are still simple and uncluttered. The electric guitar on “Sandy Toes” has a perfect tone, and is used to color the overall artistic palette, not to draw attention to itself. It shimmers beneath the bass (which is mixed high and provides much of the melody.) A quiet organ in the back of “Hey, Who Really Cares” similarly heightens the mood without changing the overall nature of the song. An unexpected middle section with horns (yet again, used in a subtle way) turn “Morning Colors” from a good song into an excellent one. An even sparser guitar and voice accompaniment works perfectly on songs like “Chimacum Rain” and “Call Of The River,” where backing vocals add depth and the occasionally dissonant melodies and chords create tension. On a more conventionally pretty song like “Dolphins” or “Delicious” a few more instruments would have been welcome. These songs, the album’s two weakest links, are nice, but generally float by the listener without leaving much of an impression.

The title track is the song that first attracted the attention of psychedelic collectors, and rightly so. A simple 10-line circular melody, in which several voices snake around each other, is interrupted by a startling drumbeat, then a series of vocal and musical effects. When this trip ends, the song returns, and the listener hears the second verse with a transformed state of mind. Fittingly it ends in a wash of echo. “Moons And Cattails” is equally far out. Perhacs lets her voice waver up and down at the end of the lines, mimicking the sound effects beneath. When she sings “come along,” you hear wind in the background, drawing you with her.

PARALLELOGRAMS isn’t perfect, for reasons discussed above. Nonetheless, it’s a pure and honest listening experience, a masterpiece. While the Joni Mitchell comparisons will go on for time eternal, the fact is that this is an original a work as you’ll find by anyone from 1970, and that 30-plus years of time have only served to heighten its greatness. The lack of love song lyrics, alone, is enough to distance Perhacs from the pack. It’s an album that should be in any comprehensive psychedelic or folk or singer/songwriter collection. It’s an album that John Mellencamp and a legion of Rolling Stone-type critics should be ashamed of themselves for dismissing.

The current CD issue on The Wild Places label is unquestionably the best version of PARALLELOGRAMS. The LP itself was released twice (the second pressing probably very soon after the first.) Word on the street is that the second pressing is better (though a few of the sound effects are missing, for some reason), but no one disputes that the LP has a flat, washed-out sound and suffers from poor quality vinyl that causes pops and tics even on first play. Linda herself was so disgusted by the sound quality of the record that she shelved it instantly and only listened to a cassette she made from the master tapes. The first Wild Places CD reissue was made from a vinyl transfer, and while it was free of surface noise, the effort to remove the noise heightened the flatness of the sound. The second Wild Places CD issue, from master tapes, is an absolute revelation, bringing amazing fidelity to the sound. The instrumentation is cleaner and clearer, the use of reverb stronger, and the overall sound denser and spacier than ever before. It’s remarkable that the album had been correctly labeled a masterpiece even with the original murky sound. Now there’s no doubt whatsoever. Most of all, the subtle and low-key songs have suddenly revealed themselves as much better than we had ever noticed (i.e. it took this reissue for me to fully appreciate “Moons and Cattails” and “Morning Rain.”) This reissue also has some interesting bonus tracks, including alternate versions/mixes, a clip of Perhacs discussing production ideas with her engineer (proof that the thoughtful sound effects and arrangements were her own ideas), and two versions of a previously unreleased song, “If You Were My Man.” This new song is more commercial sounding that the album proper, and its piano arrangement puts it into a less folk-oriented singer/songwriter mode. It was obviously omitted from the original album because it didn’t fit. Nonetheless, it’s terrific, and shows that had Perhacs continued her career she could have moved successfully in a new direction. It’s a rather tantalizing glimpse at what may have been, and as such a fascinating addition to the album. There is also a concurrent Korean vinyl reissue, with the new, superior sound and some of the bonus tracks, including “If You Were My Man.”with the new, superior sound and some of the bonus tracks, including “If You Were My Man.” ~
Aaron Milenski