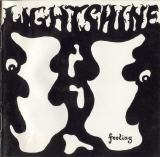 "An unknown little gem of Krautrock! Feeling is the only album by LIGHTSHINE and features five epic floating pieces of music, mostly dominated by electric guitar.

The disc opens with Sword of the Sky, a very trippy beautiful song which makes immediately the listener fly in space. The sound of the guitar resembles LED ZEPPELIN's No Quarter. Then the song becomes more energic to let appear a surprising but very good flute solo in the vein of Jethro Tull. Lory is a reprise of Grieg's "In the Hall of the Mountain King" with spacey guitar and rock vocals! After comes Nightmare, a symphonic prog song featuring pure German Krautrock sounds, with many changes and sometimes reminiscent of ELOY. King and Queen is the second long piece of the album. This tune is sad, enchanting, and transports you to the middle-age. The disc ends with Feeling, a very relaxing song with smooth vocals. The finish is psychedelic

Feeling by Lightshine is definitely an album to discover. The band manages to bring something new to the Krautrock movement by adding a symphonic medieval touch to space rock ! All guitar solos are great.

Unusually, Lightshine sounded very psychedelic for a band in 1976, their personalised brand of progressive rock was heavily inspired by British bands like Family and Genesis, along with touches of early Jane, Eloy, or Satin Whale, but with a touch of Teutonic eccentricity, their twist on Peter Gabriel type theatrics is highly original, and with complex arrangements and clever (sometimes very funny) songs, it all made for an enjoyable and inventive album. But, aside from getting enough interest to repress the album a year later, Lightshine never got above the ranks of support act to the likes of Hoelderlin or Scorpions. They disbanded in late 1977." (The Crack In The Cosmic Egg)
_______________________________________________________________________
"This group released the impressive album Feeling (1973), a classic among small label releases. Unfortunately I'm not able to give you the full names of this crew, as the sleeve only stated their forenames. The band was from the Emmerich area near the Dutch border, recording their obscure album in an unknown studio named Trepita-Film-Ton-Studio (whose label was also responsible for the release). It's hard to give you an accurate impression of this album because of its great variety. They obviously loved to incorporate crazy elements into their music, as illustrated by the primal screams at the beginning of "Sword In The Sky" and the King's laughter in "King And Queen". There were also moments of great beauty: the cosmic, Ash Ra-like guitar style on "Nightmare" with soft vocal harmonics and synthesizer textures. "Lory" borrowed the bass pattern from Grieg's composition "In The Hall Of The Mountain King" and had gutsy, distorted guitars. The aforementioned "King And Queen" was a 13 minute opus, merging melancholic melodies, lyrics and dreamy instrumental parts with the sudden appearance of the insane king! The album concluded with "Feeling", a kind of acid-folk composition culminating in a final frenzy. Overall, an extremely good album, well worth hunting for! An original copy will cost you more than 250 DEM!" (Cosmic Dreams At Play)
_______________________________________________________________________
"Lightshine were one of the many shortlived underground Krautrock bands that left behind this great debut album for all to discover. This album features the solid musicianship of 5 proggers who have crafted 2 sides of some pretty dark yet melodic music. Lightshine drip Ash-Ra like guitar solos, space keyboards and flute over a dark full bodied bass and drum foundation. Their music is aggressive yet very much contained. According to the liner notes these guys played along with the likes of Jane, Hoelderlin and the Scorpions (suspect not the "Rock You Like A Hurricane" era !). "Feeling" contains 2 epic tacks which really give the band some room to experiment and wind out their solos onto. Overall a great album to play and enjoy again and again and a great find in the lot of 70's Krautrock." (Unger's Wonderful World Of Progressive Rock)