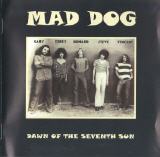 "Monstruous and unreleased at the time heavy/psych west/coast artefact of the highest order. This one of the 5 best ever promo only releases to emerge from California. Only released in quantity of a couple of copies to get a major record deal that never materialized. 3 of the songs were used in a low-budget biker flick called "Black Angels"."

"Mad Dog - Dawn of the Seventh Sun CD. CD reissue of this unreleased album of West Coast psych recordings from 1969. Monstrous & unreleased at the time heavy/psychedelic/West Coast artifact of the highest order. This is one of the five best-ever promo-only releases to emerge from California. Only released in a quantity of a couple of copies to get a major record deal that never materialized. Three of the songs were used in a low-budget biker flick called Black Angels. The original demo LP had only a plain black label with no kinds of credits. The original producer told us that a demo-only LP was released by The Zoo after the Chocolate Moose album. The slightly different line-up had the name Joyful Noise (you can see a scan of the acetate in Hans Pokora's 4001 Record Collector's Dreams) but at this time they were looking for a tougher name to fit to the music and they found Mad Dog. Under this name a couple of test pressings were done. So we made a re-release deal straight away. To our surprise the guy told us, after hearing the tape, that he knew the music and that it had already been re-released by another label without any kinds of info using the numbers from the dead end part of the vinyl which was C1/C2! The C was for Cavett, the producer's name. Since the project was already paid, we decided to go on with the release to please collectors with an amazing remastering straight from the master tapes, and an insert with unseen pictures and a band bio written by Morgan Cavett."