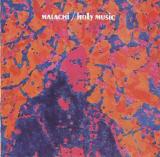 Recorded in San Francisco in August 1966, this Collection of Lengthy, Acid-tinged Folk Instrumentals is One of the Earliest Specifically Psychedelic Albums Ever Recorded, and Makes Its CD Debut Here. As the Original Sleevenotes State: "Malachi's Music Transcends the Traditions of East and West, and Represents the New Synthesis which is Still Being Worked Out in Aesthetics, Philosophy and Religion by Those Participating in the Psychedelic Revolution."

A very tripped-out set of meditation music issued by Verve in the late 60s, and arguably even more spacey and atmospheric than some of Tony Scott’s similar records for the label at the time! Malachi is actually John Morgan Newbern working here in a spare setting to capture the “evening vibrations” of a single night in 1966 served up through instrumentation that includes low-end percussion, acoustic guitar, and a fair bit of Jew’s harp played by Steve Cunningham (of Red Crayola fame), but drifting out slowly over the longer tracks in the set.