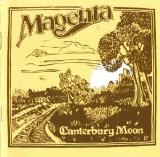 Magenta first appeared as a four piece folk act in 1974, playing clubs and concerts in and around Weston-Super-Mare, and specialising in vocal harmony based around three female voices. With the departure of two of the founding members in 1975, Janet and Arthur Brown carried on as a brother and sister team until the summer of 1976 when they were joined by Mervyn Brown who broadened the scope of the band to include some powerful vocals and a touch of humour. They were finally brought back up to strength with the arrival of multi-instrumentalist Pete Thompson in August 1977, following the demise of the popular traditional duo Broken Spectre.