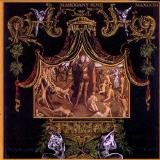 Label: Big Beat
Release on Big Beat featuring the first three albums bythis Hendrix-influenced Canadian heavy metal trio, includingthe first legitimate appearance on CD of their rare & often bootlegged 1973 debut album 'Maxoom'. The other two albums are 1974's 'Child Of The Novelty' & 1975's 'Strange Universe'. 30 tracks total, all taken from the original master tapes. Double slimline jewel case. Frank Marino is a superb guitar player and the music is good. This is what its all about.

Frank Marino grew up in Montreal surrounded by music and formed what would become Mahogany Rush with Paul Harwood on bass and drummer Jim Ayoub in 1970. Heavily influenced by the likes of Jimi Hendrix, Marino's early guitar-work was frantic but engaging, and showed a lot of promise. The band recorded MAXOOM in Quebec's Little Coyote Studios in early '72. Their simple, three piece sound was seldom burdened with over-dubs and was demonstrated in "Buddy", the band's first single. Although it didn't catch on in Canada, the record quickly caught the attention of the FM market in the north-eastern States.
CHILD OF THE NOVELTY was put out in early '74 and picked up where their debut left off, an all out assault on the ears. Buried beneath the blazing riffs Marino had already made a name for himself with was the only single "A New Rock and Roll". Though it too failed to make a dent in the Canadian market, the airlplay given it in the U.S. landed Mahogany Rush dates opening for the likes of The Amboy Dukes, The Chambers Brothers and Graham Central Station.

STRANGE UNIVERSE was released less than a year later and contained the single "Satisfy Your Soul". Though Marino's guitar work was as detailed yet as hectic as in the previous records, STRANGE UNIVERSE failed to build what one would have thought was a natural progression.