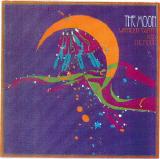 The Moon was a short-lived late-'60s psych-pop "supergroup," notable for featuring ex-Beach Boy David Marks on lead guitar. 20-year old Marks had, by then, enjoyed quite a career. At 14, circa 1962, he joined the Beach Boys as a rhythm guitarist (the Wilsons were his neighbors in Hawthorne, CA) when Al Jardine left their lineup to attend dentist school. Marks appeared on the first four Beach Boys albums and several hit singles, including "Surfin' U.S.A." and "Surfer Girl." When Jardine returned, Marks, just 16, became the leader of Dave & the Marksmen, who had localized hits with "Cruisin'," "I Wanna Cry," and "I Could Make You Mine." Marks then formed the Band Without a Name, who recorded two singles for Tower and Sidewalk and were the house band at two Sunset Strip clubs, circa 1965-1966. After leaving this group, Marks formed the Moon with organ/pianist/vocalist Matthew Moore, who penned most of the band's songs. Moore's previous group, Matthew Moore Plus Four, had recorded for GNP Crescendo, and also solo material for White Whale and Capitol. The other Moon members were bassist David Jackson (ex-Hearts & Flowers, who had two LPs on Capitol in the late '60s) and drummer Larry Brown (ex-Davie Allen & the Arrows and a veteran of countless film soundtracks and those Sidewalk/Tower releases that were produced by Mike Curb). The members of the Moon literally moved into Continental Recorders in Hollywood, where they recorded two albums — 1968's Without Earth and 1969's The Moon — for Imperial. Today, Marks admits these were produced under the influence of LSD, and sound "like a cross between the Bee Gees, the Beatles, and Jimi Hendrix." The group's membership also included bassist Andy Bennett and session drummer Jim Keltner occasionally filling in.
After the Moon dissolved, Marks began working as a studio musician with Denny Brooks, Delaney & Bonnie, and others. Marks, Moore, and Jackson later worked together — alongside members of Colours and the East Side Kids — on Buzz Clifford's See Your Way Clear album. Marks also joined Mike Love's Beach Boys, but was forced to leave due to his own battle with Hepatitis C. He founded the non-profit Artists Against Hepatitis foundation and became the national spokesman for the Hep C Hope Foundation. More recently, he still finds time to tour with Beach Party!, made up of former members of the Boys' touring band. Moore, meanwhile, joined Joe Cocker's 1970 Mad Dogs and Englishmen Tour, which was captured on vinyl and film for posterity's sake (Cocker performed Moore's "Space Captain"). Moore then went on to have a successful career as a session vocalist and keyboardist, recorded solo albums, and even had his own label, New Decade. David Jackson went on to become the bassist with Dillard & Clark. Larry Brown played with Gunhill Road, Tony Allwine, and was the official voice for Mickey Mouse.
~~~~~~~~~~~~~~~~~~~~
The mysterious Moon....a bit of a Los Angeles pop supergroup.....for all those Beach Boys fans who wonder what became of the 'lost' BB David Marks between stints in the group, here is a part of the story....The Moon were David Marks, garage punk legend Matthew Moore, David Jackson, late of Hearts & Flowers, and Larry Brown, who had drummed with Davie Allen, King of Fuzz, and played on every exploitation soundtrack out of the Mike Curb closet.
Signing to Hollywood's Imperial Records label, they were given Carte Blanche to do what the hell they wanted in the studio, and two excellent albums "Without Earth" and "The Moon" resulted....prime Psych fuelled soft pop with a weird edge.....Imperial's slow collapse into the United Artists empire doomed them as it did many artists to a lack of promotion....indeed, their one and only photoshoot was found in a skip by David Marks' mother (who worked at UA) along with promos of everyone from Eddie Cochran to Jackie De Shannon to Kim Fowley.....when they cleared an office, they cleared an office!! [http://www.revola.co.uk/]

The Moon recorded two albums in 1968-69 that were both heavily influenced by the British invasion sound of the Beatles. Many of the late 60s groups who were inspired by the Brit invasion sound - The Moon included - have never had their music released on cd reissue - but thanks to Rev-Ola, both of The Moon's albums (1968's Without Earth and 1969's The Moon) plus alternate single mixes and a few related singles by Matthew Moore Plus 4 have all been released on a single cd.
The various members of The Moon were no strangers to the music business. David Marks had been on the first 4 Beach Boys' records, replacing Al Jardine for a little while. Matthew Moore had recorded with the Matthew Moore Plus 4, while David Jackson had played with folk rock group Hearts & Flowers and Larry Brown had worked with Davie Allen & the Arrows. Coming together in 1968, The Moon gathered together in Larry Brown's own recording studio and recorded a lost classic of British invasion influenced pop rock called Without Earth, and a follow-up album simply titled The Moon which is not as classic, but still worthy of being included on this two-fer. Without Earth contains compelling melodies, stellar harmonies, incredible orchestration, and an incredible 60s psych sound throughout. There simply is not a poor track on Without Earth. Without Earth starts out on an incredible high - from the piano pounding Mothers and Fathers, to the Sgt Pepper 'tron melodies of Pleasure, and the sitar-drenched Colours cover of Brother Lou's Love Colony. (Colours was another Brit invasion inspired late 1960s band who was recording their album had the same time as The Moon and who also needs their albums to be reissued soon). Got to Be On My Way is one of my favorite songs on this album and one of the more hard rocking, with it's Hendrix inspired psychedelic rock guitars, soulful chorus and handclaps.
The second album, simply titled The Moon, while losing a lot of the Beatles' orchestrated psychedelic touches, did retain the more soulful side of the late 60s brand of Beatles' pop (think Paul McCartney and his piano led songwriting style coupled with his angsty lead vocals). There is a heavier use of lead guitars and piano led tracks, with less distinctive songwriting on the second Moon album. I think other albums by artists like Bergen White (who had an album out in 1969 called For Women Only) were mining this same territory with far superior results. Mary Jane and Come Out Tonight however, are both really nice slices of orchestrated pop. Lebanon has a soulful organic feel to it.
Sadly neither of the two albums by The Moon caused much of a stir at the time, mainly due to the lack of promotions on the part of their label, Imperial Records. After the second album fizzled, the various members of The Moon decided to call it quits and they all headed onto more lucrative pastures - leaving the Moon's recording output to languish in obscurity. While the second album by The Moon has less to offer than the incredible first album, it still is nice to have both their albums complete on one cd. The Moon's Without Earth was a lost, classic slice of late 1960s pop, and it is wonderful to finally hear it, after all of these years, in this cd reissue. [http://www.gullboy.com/buy/2003/3_25/moon.cfm]