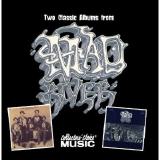 "Mad River only existed for about 4 years, in which time they made 2 albums. Later, Lawrence Hammond made a solo album. That and the second album (Paradise Bar and Grill) are forgettable, but the debut was a superb slice of psychedelia.
Originally released in 1968, due to a mastering error the resulting vinyl played back faster than it was recorded. Speedy enough to begin with, this made it a tough album to listen to. The CD reissue on Edsel rectified this error, and if you can find a copy the effort is well rewarded. The main reason for the band’s drop by Capitol records was the surreal, druggy lyrics, and psychotic sound. A clue to what to expect. They are actually one of the most psychedelic sounding bands of the era. At times they are a bit like Quicksilver, at others like Big Brother, but imagine either of those groups playing much more tightly arranged, faster tempo, lyrically complex compositions and featuring a demented vocalist and you’re getting close. Berkeley neighbours of theirs were
the legendary Frumious Bandersnatch who are also worth checking out. Merciful Monks opens with rocky riffs and frantic part play, strained vocals and lyrics like: “Didn’t you say I could hold a broom and sweep the burning nostrils into the sea?” There’s a guitar solo that leaps and
twists everywhere, threatening to descend into chaos but never quite losing it. “High All The Time” is next, with a fade-in start. As you can imagine this song is about taking certain substances, and Lawrence sounds suitably stoned. Great big movies inside your head, your mind's
eye is just a camera taking photographs. The track has great fuzz guitar licks all the way through, as well. Amphetamine Gazelle opens with Greg Dewey, the drummer, stammering and muttering in imitation of a speed freak, and then the song rattles along with more crazy lyrics from Hammond and high octane guitar work.
Eastern Light is a sentimental, bluesy ballad with a sad, moody bridge and a wistful climax. For me the only slightly weak track on the album. The side 2 opener is “Wind Chimes,” and it starts with wind chimes tinkling in the breeze. It is an instrumental that builds and builds. Gentle harmonics and rhythm guitar are overtaken by panning distorted lead that develops into an eastern sounding jam of power, complexity and stunning beauty with an almost Bach-like quality at one point, followed by a tattoo of a drum climax from Dewey and a gentle subsiding afterglow. Next the 12-and-a-half minute War Goes On screeches, rattles and squeals its way into your consciousness. This sounds like a Vietnam veteran’s nightmare, a grinding, screaming, angry horror story of a song; you can almost taste the napalm. The final track is the brief, acoustic lullabye, Hush Julian." ~ DoctorDark

As a follow-up, PB&G is an eclectic departure from the first album. They must have sensed that the winds of change was blowing away from psychedelic music, and with the likes of Dylan, The Band, The Byrds, Poco, The Flying Burrito Bros. and The Grateful Dead all changing direction and picking up on a mellower 'country' sound. Not that Mad River totally left mind-altering acid-rock behind. Those elements are still present on PB&G, though toned down a bit. But perhaps the band was hoping for some commercial success (slightly un-hip at the time, though it pays the bills) and trying to stay on the leading edge.

Personally, I like the album a lot, though for different reasons than the first album (which requires a certain state of mind to truly appreciate). The songwriting is top notch, but hardly mainstream. That is what made them unique, along with their abundant musical talents. As a musician I find more to take from the second album than the first. It has more textures, and a wide (too wide for most) range of styles. The first album is a timeless psychedelic treasure, and a true classic right up there with the Dead's AOXOMOXOA, and the second is a close cousin to the Flying Burritos "Gilded Palace Of Sin" and the Jefferson Airplane's "Volunteers".
There are three 'pure' country songs on "Paradise Bar & Grill": The title song, "Copper Plates", and "Cherokee Queen". The first is a waltz sung by bassist/pianist Lawrence Hammond with his unique tremolo, and features a pedal steel guitar solo, while the other two were sung by drummer Greg Dewey. Lyrically, the first song would have fit in on the first album, though the music would sound fine behind George Jones. "Copper Plates" is an up-tempo hot-pickin' send-up on counterfeiting, complete with banjo, and "Cherokee Queen" is a sad tale set in 3/4 time with some fine pedal steel guitar. It is downright tranquil.
The second big change is the inclusion of two short acoustic instrumentals (Harfy Magnum, and Equinox) and another acoustic tune that featured writer/poet Richard Brautigan reciting his own poem. (Brautigan was a big fan of the group, and he helped support them before they signed with Capitol. (Read his books.))

The remainder of the cuts could have easily fit on the first album. "Leave Me/Stay" is the killer follow-up to "Eastern Light", featuring a patented Robinson guitar solo and Lawrence's heartbroken vocals. "They Brought Sadness" feature a mix of electric and acoustic guitars and an inventive harmonic structure. Dewey sings this and the next song, "Revolution In My Pocket", which takes a musical scenic route through rock, funk, folk and choral music. It's even beefed up with horns. Without a break it goes straight into "Academy Cemetery", a fully electric instrumental augmented by the band's manager playing the congas. It's vintage Mad River, twisting, turning and snaking as it reaches a great climax and then coasts to the end. (This is where you would light a cigarette...)
The band had gone through some changes for their second album, most notably the departure of guitarist/bassist Thomas Manning. Manning appears on several cuts, as does producer Jerry Corbett and his Youngblood alumni Banana, both contributing pedal steel guitar. The pedal steel guitar in question was originally owned by Jerry Garcia and sold to Banana. This is before Garcia was serious about the instrument (ca. 1966)

The listener who expected another album like Mad River's first were probably disappointed with the country leanings on Paradise Bar And Grill. But as an attempt to tame the group and make them more accessible to the general record buying public, it's a big step forward. Put this record on between Crosby Stills & Nash's 1st and The Grateful Dead's "Workingman's Dead" and it's a perfect fit. ~ Roger Stomperud