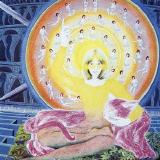 Super Record, the second of Magical Power Mako's 20-plus recordings, is considered by those that know to be his finest, combining strong elements of Japanese folk music alongside innovative psychedelic sounds and broad musical vistas of extraordinary imagination. Mako was born in Shuzeni Izu in Japan in 1956, and after commencing his musical education at a young age, making his first public performance in 1973 at the age of 16 with his band Genge in the famous Shibuya Club. Based on these impressive public performances, the precocious Mako was invited to play with one of Japan's foremost contemporary composers, Toru Takemistu, playing alongside the composer in 3 film scores, Inheritance For The Future, Petrified Forest and Himiko. The response to his performances was overwhelmingly enthusiastic, elevating Mako to almost god-like status in his native country. 14 tracks.

New UK reissue of the second (and all-time best) Mako album, originally issued by Japanese Polydor in 1975; there have been a couple Japanese CD reissues of this in the past, which are no longer available. One of the key documents of Japanese underground psychedelic music, presented in truly sublime fashion. Although MPM went on to record 20+ more records after this one, he would never exceed the spatial exuberance of Super Record. From the liner notes: "Mako's music possesses a certain strange kind of texture. It's certainly is what they call rock, but contains elements that we can't describe so succinctly. It clearly goes beyond the various genres of music, and while full of them all, it sends forth a fierce glow. This 'Super Record' shows Mako looking down upon the earth from above, wandering through Alaska and Siberia, the Near East, Okinawa, and South America. Adding to the variety of folk music of India, Turkey, and Russia, his mandolin or Taisho koto, and especially his marvelously performed guitar, expressing fully the odor of the soil and mankind's universality."