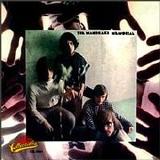 The Mandrakes’ first album cover featured a pic of them doing the Indian Rope Trick, inset to a shot of them in a circle holding their hands at such an angle to suggest you would be their next hempen conquest. Utterly appropriate somehow. (It was engineered by Val Valentin, who also mixed the 3rd Velvet Underground album, which I’d much rather listen to/be seduced by. And so would you, if you’ve ever heard either.) I’m told they were “the best live band in Philadelphia at the time,” which begs the question of what the criteria for a live show were from a band like this, back in them thar daze. Let’s just say these guys had fast songs and slow songs, but nothing was especially kinetic. Maybe it was more a matter of how sensually the bass player managed to rattle the cushions everybody would have been sprawled out on? Or maybe they were the first band to do away with the “bring your own” policy for Mr. Bubble and lilac petals? Did their light show have the reddest reds, the greenest greens, the purplest purples? Forfeited to the vasty mysts of tyme, such questions are. (Thank ghod!) As with the early Doors, their live show and the first album were essentially the same; the album has a “live” sound to it, an aural documentation with a minimum of overdubs. Listen to it through an echo-box, and you’ll be there. Even if you never were.

[Time out: All we're lacking is a lyric sheet; though I guess it’s OK since the way the albums were mixed you couldn't miss a vocal if you wanted to. I’ll leave most of the thrill of discovery to you, but who could resist a verse like: “Strange/When you find the world isn’t/A story-book place”??? Every so often you encounter a lyric so gauche it defies you to comment. Rather than give it the satisfaction I’ll move on.]

The interplay between the amplified harpsichord and electric guitar in this gem of a psychedelic group is worth the price of admission alone. There is no air between the tracks so a seamless dance spins hypnotically for 38 minutes through a variety of moods and tempos. Chord progressions and musical structure sound a wee bit simplistic and dated on this first outing, but nothing grates and the vocals are silky and soothing. The musicianship is excellent though slightly constrained in the studio, compared to their live concerts.
Mandrake Memorial seemed to play constantly in the Philadelphia area when I was groping my way through adolescence. I saw them three times without really trying, they just showed up where I happened to be, from Beach Haven, NJ to my high school auditorium at Conestoga in Berwyn PA. On stage they didn't jump around, they weren't flashy like Nazz, or obtuse and humorous like Lothar and the Hand People, (two other regional groups Mandrake were friends with) -they just played really fine rock. Music that moved but was also poetic, ethereal and dreamlike--their sound defined a very rich, turbulent and painfully short era (1968 through 1970) for those who came of age in that time. Today Mandrake's music is still refreshingly cheerful, introspective, warm and innovative. They are also overlooked and unknown on a national scale. Mandrake Memorial was a cherished group by those who grew up with them. They were the tangible and accessible underground alternative to commercial top 40 radio. I know friends who kept their Mandrake albums into the 1980's and were delighted when they finally reappeared on cd. After 9/11/01 I sought the selective comfort of nostalgia and the smiling sounds of forgotten friends. Mandrake Memorial's first album fit the bill perfectly.

I started listening to these guys in the late 60's and to me this album is timeless. I actually heard them for the first time in 68 when they played on the same card as The Doors! They stole the show that night. A sold out arena and they got a standing ovation! I immediately became a fan! If there is a question in your mind don't hesitate to GET THIS CD!!!!