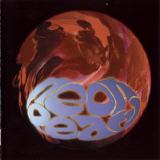 First time on CD for these incredible sessions from the year of psychedelia's apex. Top notch floating underground psych with organ and harmonium -- features members of Please and The Flies who were later in legendary band T2 (the sleevenotes try to make the convoluted band history clear).

This edition is taken from the master tapes, and comes complete with two bonus tracks.

This was the first band of Peter Dunton, who later played with Please, T2 and The Flies. Recorded in 1967, these previously unreleased demos were studio versions of the bands live set and display an evocative line in psychedelic rock with a slight garage psych/folk rock edge. Drifting guitar work and melodic vocal harmonies make this an interesting and unique piece of UK '60's rock history.
~~~~~~~~~~~~~~~~~~~~~~~~~~~~~~~~~~~~~~~~~~~
Neon Pearl was a 1960s British psychedlic band consisting of Peter Dunton (vocals/guitar/keyboards/drums), Bernard Jinks (bass guitar/backing vocals) and Nick Spenser (guitar/harmonium/keyboards).

In 1967, Neon Pearl released the album 1967 Recordings, which is a fine example of experimental British psychedelia with its hazy riffs, mild guitar distortions and vocal harmonies. Dunton was also in the marginally less obscure British psychedelic bands the Flies and Please, while Jinks later played in Bulldog Breed and T2, the latter also including Dunton.

Popular songs included "Forever", "Going With The Flow", "Just Another Day", "Out Of Sight" and "What Do You See".