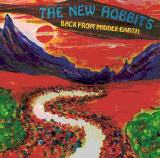 First time issue of unreleased third album by USA 60's band The Hobbits. Originally this album was to be released by Perception Records in 1969 but was shelved. It's a delightful example of orchestrated US 60's pop with a psychedelic edge very much in the mould of the other two Hobbits albums .

Back From Middle Earth, The Hobbit’s third and rarest psychedelic recording, appeared in 1969 on Hobbit-supremo Jimmy Curtiss’ Perception label, an imprint that bizarrely was to include Dizzy Gillespie, Shirley Horn, Tyrone Washington, Johnny Hartman, Astrud Gilberto and even Jimmy Lunceford amongst its alumnists. Although The Hobbits owed their name to the writings of Tolkien, there was little of The Shire about their music, which Curtiss described as “vocals with instrumental accompaniment”, with the emphasis very much on sophisticated harmonies reminiscent of contemporaries such as The Cowsills and Jay And The Americans. Curtiss made his recording debut as Jimmy Curtiss & The Regents in the late ‘50s, but surprisingly Return To Middle Earth is a solid ‘60s pop album which highlights the vocal talents of Curtiss and session-singer Gini Eastwood and is completely free of any references to Curtiss’ doowop past, as indeed are the three heavily psych-influenced 45s Curtiss produced (he also co-wrote two of the tracks) for Decca stable-mates The Bag in 1968. Exactly why The Hobbits changed their name to The New Hobbits is unclear, but this may, along with the album’s release on Perception (the band’s two previous efforts had both appeared on Decca) go some way to explaining why the album remained largely unknown (many Psych collectors have never seen a copy of the album), and consequently is so highly sought after today. ~ blueorchardrecords.com

Note: To all appearances, the tracks 'I could hear the grass growin'' and 'Underground' are not by The Hobbits. The songs originally came out in 1968 by Fire & Brimstone. Look at the comment section for more information.