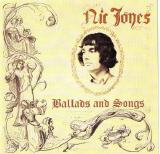 Nic and guitar only. He had developed a delicate, fingerpicked guitar style and had a light, neat-sounding baritone voice. He had also established, very early on, an ability to take a traditional song without a tune (or with a tune that he didn't like) and set it to another tune that was either partly or entirely of his own making. Here we already have two of the songs that are most often cited now as among Nic's most lasting contributions to the tradition - Annan Water and Sir Patrick Spens. Listening to Ballads and Songs in the context of what was to come from Nic, it sounds very much a thing of its time, with the tightly-controlled singing, scholarly sleeve notes and carefully arranged guitar.